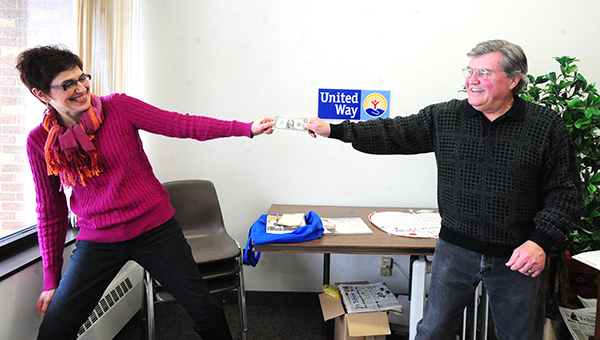 To be able to do that, it has to hold its agencies and itself more accountable than ever for spending.

More accountable does not mean less money, however.

“We’ve given more out this year than we ever have,” said Executive Director Ann Austin. “It’s just accommodating the need that has been increasing dramatically.”

Austin, Bob Haas and Mary Laeger-Hagemeister want the community to understand the United Way has in-depth discussions about funding and helping in other ways like advocating and volunteering, but may not always have the right answer.

“We want to work with everybody but obviously we can provide funding only for the most impactful programs in the community at this point and time,” Austin said.

That’s why collaboration and evaluation is becoming so important, especially in a county where the last recorded poverty rate was 12.3 percent.

Something the United Way board is working on is bringing in tools that teach its agencies how to do an effective evaluation of the programs that they’re putting on.

That way when the board or allocations committees asks what the program is doing, it can show exactly where its money is spent.

“It gives them a better idea also to where they can improve their programs to do the best for their clientele,” said Laeger-Hagemeister, the 2013 United Way chairwoman, said. “The expectation is that all the agencies will attend that.”

By giving its agencies the right tools and the same tools to evaluate, it also makes it easier for the United Way to approach its contributors and say why they need more money than previous years because they can show what money is being spent on.

Austin said the United Way is trying to hold itself accountable, too, to make sure it is part of the solution.

“We’re making sure we’re not just giving money off to these programs and saying here you go do your good work,” Austin said. “It’s really about working together with them to support them and help them be more effective. A lot of times it means bringing in more people to the conversation.”

Bringing more people to the conversation is exactly the road the United Way of Freeborn County is headed down. Even though there is a limit to funding, there are other ways it can help agencies and organizations.

“It’s actually a nationwide, worldwide example — giving, advocating, volunteering — you can better solve problems by using all of those resources in a community,” Austin said.

An example of the effort would be office upgrades.

Many of the United Way’s agencies have needs for newer technology, but instead of spending their budget on technology, the United Way has connected them with people or groups in the community who had those items to donate.

Austin said while it’s a long-term effort, another way agencies can improve without increasing the need for funds is sharing space and resources with other agencies.

Haas, the former chairman, said groups need to get out of the “everyone protects their own turf” mindset.

“It’s not giving something up, it’s collectively coming together to coordinate services,” Haas said.

Some of the other changes that the United Way is seeing that have an impact funding wise is that organizations are finding other means for funding and transition out of the United Way program or they are giving back money they didn’t need to allow funding of other services in the community.

“It doesn’t happen very often, but it shows you that they’re not just saying, ‘OK we got $20,000 from the United Way so we’re going to spend it all,”’ Haas said.

Austin said with the step toward more collaboration and accountability the United Way of Freeborn County is just tying in to what other groups have already started to do because many of the agencies it works with already have expectations put on them to be more accountable.

“We’re trying to provide extra resources to those who haven’t had that exposure before,” Austin said. “And, it’s more of a challenge sometimes as a smaller community because we have less resources at hand and, of course, a smaller staff size, but I think it’s really important for us to move in this direction.”