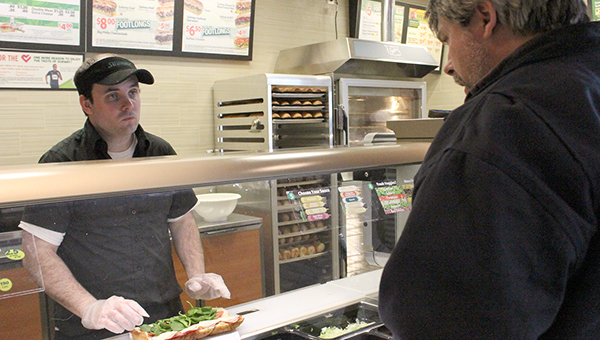 The latest ad slogan for the sandwich chain Subway is: “Gotta Have It, Taste.” Now, the people of Wells can say they “have it,” too.

A Subway restaurant opened Dec. 3 in Wells at the intersection of Second Avenue Northwest and Minnesota Highway 22. So far, so good for the business. They’re also much busier in the evenings than expected, said manager Curtis Lind.

Randy Wartner, who lives in Marshall, is the owner of the restaurant, and he’s been trying to bring a Subway to Wells for eight years, Lind said. Word broke last spring that Wells residents would get to “eat fresh” locally.

Folks kept asking when the restaurant was going to open and even stopped by during the construction process, according to Lind. A gas station was on the site before Subway. Customers kept saying during the first week how glad they were that Subway was finally open, Lind said. 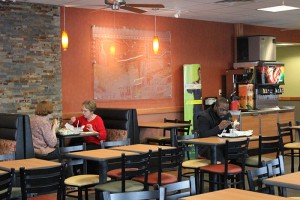 Customers eat their submarine sandwiches at the new Subway in Wells. The dining area can seat up to 81 people.

“People were so excited,” Lind said. “There’s a huge buzz.”

Subway is across the street from Casey’s General Store and Dairy Queen. It also joins Jake’s Pizza and Wildcats Bar & Grill for food options in town. Some are worried about how the competition of Subway will affect the other restaurants, Lind said, but he thinks a little competition is good.

The sandwich shop seemed to be a popular spot for a lunchtime crowd on a Thursday in January. Julie Bach and her husband, Gary, of Minnesota Lake, were in town to get their pickup repaired, so they decided to get a bite to eat before the trip home. They’ve been to the Subway three times since it opened and have had good service.

“We like this option,” Julie Bach said. “It’s a nice, healthy option. And it’s fast and they have lots of seating in here, too.”

The seating capacity is 81, according to Lind.

Julie Bach heard about Subway coming to town when she was at the grocery store.

“I was surprised that that big of a name, chain restaurant was coming to Wells,” Julie Bach said.

Michael Nasinec stopped in for his lunch break to grab a footlong Italian BMT meal. He lives in Minnesota Lake but works at Herman Manufacturing in Wells. He’s been in for lunch about a half-dozen times since the store opened, he said. You could say he’s fan of the new restaurant option in town.

He heard about the Subway opening mostly through word of mouth. It’s a convenient choice for him, since he only has 30 minutes for lunch, he said.

Some customers had never been to a Subway before, Lind said, but they said the food was good after their first visit.

Lind said a grand opening is planned for February, but the details aren’t finalized yet. The Subway in Wells is open from 7 a.m. to 10 p.m. daily and employs 15 people. Thursdays are free-cookie days, where you can get a free cookie with the purchase of a meal.