When spring is coming will remain anyone’s guess

“Everything is nearly copacetic. If a man is only as old as he acts, looks, and feels; I am 10, 50 and 90. I just talked to a couple of our old classmates. They were doing well. That’s amazing because, as students, they were a bit blurry in the gray matter. One of them was wearing new shoes. He’ll have to take them back to the alley one day or give up bowling. Seeing them reminded me that I was at the head of the class.”

“Sitting in the corner, but that’s pretty good for someone who wore out two erasers just writing his name,” I add. 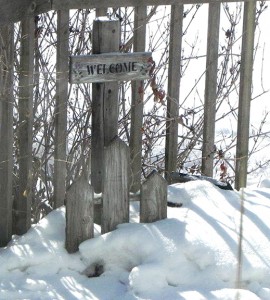 Winter hasn’t worn out its welcome just yet. –Al Batt/For the Tribune

“Yeah, well, it didn’t help that all our teachers were so grumpy. I used to bring them crab apples. They were always making me clean the blackboard. I couldn’t get it clean. The more I washed it, the blacker it became. I just kept clicking my heels together three times and saying ‘There’s no place like home.’ Schools are like everything else. They improve things by doing away with what I liked. I sat in the classroom with one of the family who’s a teacher. I was amazed to see that the test questions were identical to the ones asked in my day, but the answers are different.”

Springing into action
There are prints of darkness in my yard. Signs of primaveral animals that moved about during the night. Spring unrolls slowly. Spring is a good book, but the first few pages can be difficult to get through. Despite that, many birds are operating at beak performance.

I was supposed to spend the last day of the season in the classroom, but Old Man Winter intervened and I was left with a snow day. I decided to spend it catching up on that work that I’ll never catch up on. We all have that kind of work. Working in my office at a time when snow had not yet given way to immeasurable birdsong, my eyes moved constantly between my tasks and the brisk activity at the bird feeders. Red, gray and fox squirrels visited what they considered to be squirrel feeders. After trying in vain to count the redpolls filling my yard and watching starlings feed easily at a suet feeder that was supposed to stymie them, I needed to take the mail to the mailbox. On my walk down the driveway, I encountered two gray partridges. Snow days rock.

Folklore maintains that a wind northeast or north at noon of the vernal equinox, no fine weather before midsummer. If westerly or southwesterly, fine weather till midsummer. The wind at noon on the first day of spring was from the northwest in my yard. The weather remains anyone’s guess.

Q and A
Karen Wright of Mankato asked if squirrels get rabies. Any warm-blooded mammal can contract rabies, but the primary carriers in North America are raccoons, skunks, bats and foxes. Squirrels, chipmunks, rats, mice, rabbits and hares rarely get rabies. Squirrels may suffer from a fatal roundworm brain parasite that causes signs that resemble rabies. Opossums are resistant to rabies. Hissing, drooling and swaying are part of their bluff routine. They play possum. It’s intended to discourage predators. Some scientists believe that small animals aren’t seen displaying rabid characteristics because they are likely to die from the trauma of a bite from a rabid animal. Most authorities claim that no transmission of rabies to a human from a squirrel has ever been reported.

Roger Batt of Algona asked, “Can birds smell?” The apparatus for detecting odors is present in the nasal passages of all birds. All birds react to smell. Some are better at it than others. Turkey vultures, storm petrels, albatrosses and kiwi are some of the species at the top of the smelling class. Shearwaters and fulmars are attracted to the smell of fish oils. Turkey vultures are believed to use their sense of smell to locate carrion. Kiwis, flightless birds from New Zealand, appear to sniff out earthworms. The great horned owl that eats skunks might be at the bottom of the class of sniffers. Robins are believed to be able to smell worms, goslings use their olfactory sense to find food and starlings employ a sense of smell to find aromatic green nesting material. Even with the ability to detect odors, a mother bird will accept a baby back after it has been touched by a human. After all, she’s a mother. Studies have shown that some birds use a sense of smell to navigate, search for food, and to distinguish individuals.

Tom Ehrhardt of Albert Lea asked why wild turkeys don’t lose all their eggs to predators. Turkeys usually nest in areas (old fields, stream edges, etc.) with a well-developed understory that provides brush or vines for concealment. An egg is laid daily until a clutch of four to 17 eggs is completed. Incubation takes 28 days and all the poults hatch within a 24-hour period. The hen and poults leave the nest within 24 hours of hatching, slowed only by weather. If the nest is destroyed, some hens will attempt a second clutch with fewer eggs. Less than half of turkey nests are successful. The fact that wild turkeys nest on the ground and require a total of six weeks to complete the nesting process makes hens and their nests vulnerable to predation and to human disturbance (burning, mowing and farming). Mortality rates of poults generally range around 75 percent, with most losses during their first two weeks of life, when they are unable to fly. Predators include mammals of which raccoons have the greatest impact. Foxes, coyotes, dogs, skunks, opossums and cats are other common predators. Hawks, crows and owls are other threats as are golden eagles. Turkeys have a high reproductive potential and can boost populations quickly. I need to add that a mother turkey is a formidable animal that might cause small predators to think twice before tangling with.
Thanks for stopping by
“Whether you give it or receive it, forgiveness is music to the soul.” — Kinza Christenson
“A flower is an educated weed.” — Luther Burbank
DO GOOD.