“Everything is nearly copacetic. Pop is older than he’s ever been. He’s always wanted to fly, so I bought him an airline ticket. He didn’t want to fly far, so we flew to Chicago. We took a shuttle from the airport to our hotel and then got into a cab to take us to a fancy restaurant. I tapped the driver on the shoulder. He screamed and nearly lost control of the car. I’d scared the daylights out of him. It turned out that it was his first day as a cab driver. He’d been driving a hearse for a funeral home for the last 25 years. We had a reservation and the taxi was going so slow, I was afraid we’d be late. I asked the driver if he couldn’t go any faster. He told me that he could, but he was supposed to stay in the cab. At the restaurant, Pop pointed to the menu and told the waiter, ‘I’ll have the No. 54.’ I told Pop that was the price, not the meal number. I ordered a No. 12 for him. Pop surprised me by telling me what I should do after he’s gone. It was difficult, but I asked if he wanted to be buried or cremated. He answered, ‘Surprise me.’” 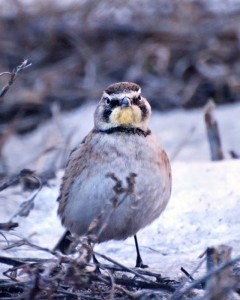 This photo of one of many horned larks on rural roadsides is by Darcy Sime of Alden.

The world is chirping

Driving down a busy road in Minneapolis I spotted wild turkeys roosting high above the street in a tall tree.

I parked and walked to the facility where I was to speak. The neighborhood was chirping. Another tree had leafed out in smaller birds. They flew en masse from the tree. The birds passed in flying colors. It was beyond cool.

I wish you a tree of singing birds.

Wayne and Shirley Gunderson live in rural Albert Lea along Pickerel Lake. A peeping Tom had been bothering them. Maybe “bothering” is too strong a word. A peeping Tom had been entertaining them. The peeping Tom is a wild turkey that had been strutting and gobbling in front of his mirrored image in the window of the Gunderson’s home. The tom was working on his dating technique. Each day, someone calls me about a cardinal fighting with a window of a house. Soon, it will be robins shadow boxing with their reflections. They aren’t bad battling visitors. So far, the Gunderson’s peeping Tom has been well behaved, but a turkey will fight with its likeness in glass, too.

I was left a swell message by a woman who asked me to call a man about an odd bird coming to a suet feeder on his farm. I did as asked.

“Hello, Mr. Smith (name changed to protect the innocent).” I said as he answered the phone.

I identified myself and added, “Nice day,” in a required effort to make small talk.

“I’d like to have a look at that bird of yours. Will you be home tomorrow morning?”

It was. I enjoyed seeing the Carolina wren.

“Why do robins remain here in winter instead of migrating?” One reason robins linger farther north than years ago is the increase in the number of ornamental fruit trees. These trees provide food for the robins. If food is abundant, robins can take cold temperatures if the snow isn’t too deep. Robins, being opportunists, persist where food is abundant until supplies are exhausted. Then they move on. An advantage to a short migration is that the robins have much less distance to travel in the spring. They are able to return to their breeding territories earlier. The Cornell Lab of Ornithology says that areas with under 5 inches of snow cover typically have many robins.

Rod and Ruth Searle of Waseca asked, “A fox squirrel in our yard has been acting sick for a few weeks. At first, he had to turn in a circle before he could move. Now he has trouble standing. His fur and tail look like he might have mange. We thought he might die but he is still out there. Any advice as to what might be wrong with him?” I’m no veterinarian, but I once played one on TV. Mange in squirrels is caused by a mite that burrows under the skin. The intense itching that a squirrel experiences when infested leads to much scratching, loss of body hair and the possibility of skin infection. This can lead to an increased likelihood of illness or falling prey to another animal. Squirrels rarely contract rabies. The squirrel might have suffered a spinal injury, perhaps in fall or in an encounter with another animal. It could be a congenital defect, possibly neurological, or the imbalance may be the residual effect of an inner ear infection. Cold weather may aggravate its problem much as cold weather aggravates arthritis. Accidental poisoning can occur when squirrels forage in trash, ingest rat poison or eat something contaminated with pesticides or fertilizers. It could be due to a nutritional deficiency. The behavior you describe is probably due to a head or spinal injury. Such injuries cause them to run in circles, shake their heads, have difficulty walking and suffer seizures.

On April 13, the Bluebird Recovery Program Expo will take place at the middle school in Northfield. The expo is a pleasing way to learn about bluebirds and other birds. Please visit http://bbrp.org or contact Jenean Mortenson at jmmclm@localnet.com for more information.

“All of humanity’s problems stem from man’s inability to sit quietly in a room alone.” — Blaise Pascal

“The sky is the daily bread of the eyes.” — Ralph Waldo Emerson