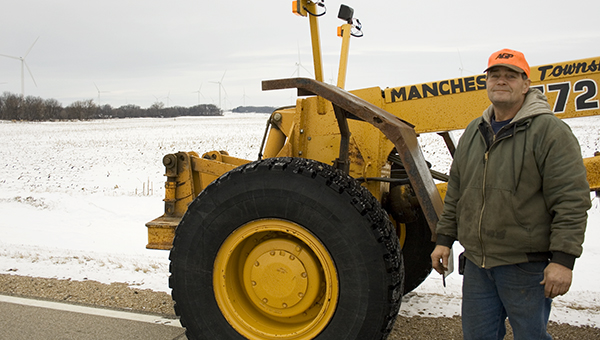 Manchester Township grader and snowplower Doug Jacobs stands in from of the motor grader the township is hoping to replace with funds from the energy production tax of the Bent Tree Wind Farm. –Sarah Stultz/Albert Lea Tribune

Two years after the installation of the Bent Tree Wind Farm, Manchester and Hartland townships are beginning to see the financial perks of the first full year of operation on the farm.

For every kilowatt hour of wind energy produced, the state collects 12 cents in an energy production tax and then sends a portion back to Freeborn County.

Eighty percent of that portion goes to the county, while 20 percent goes to local townships or cities affected.

How much did they get?

For Manchester, this is about two-thirds of what the township board levies property owners.

Manchester Township Clerk Neal Gjersvik said the amount the county and townships will receive during the next 25 years will vary depending on the amount of energy produced and whether the state Legislature changes the funding formula for how much counties and townships should receive.

But in the meantime, the townships are taking advantage of what funding they are receiving.

How has the money been spent?

In Manchester Township, the $47,000 has been spent on a few projects, including updating roadside signs and replacing a ditch mower, Gjersvik said. Money has also been put away toward a new motor grader for the township.

A new grader costs more than $200,000, and the township had been saving $5,000 a year to go toward that expense, he said. With the additional money coming in from the wind farm, the township was able to put a higher amount toward the grader in 2012.

He said the township has not opted to put the funds toward reducing the levy because there is uncertainty that the funding formula may be changed in the future. The levy could have increased, however, if it weren’t for the funds.

In Hartland Township, the almost $58,000 has been put toward buying the township new voting booths for residents, paying bills for maintenance of roads and preventing a levy increase, said township board Chairman Paul Lynne.

Lynne said there is even some money not spent that is in the bank to help pay for things that may come up.

“It’s just nice to have a little money in the bank so we don’t have to worry each month,” he said.

Bent Tree has 122 turbines and is capable of producing up to 201 megawatts of energy, enough to power 50,000 homes. It is Wisconsin Power & Light’s second owned and operated wind farm.