Snow cover makes it tough for temperatures to rise

“Everything is nearly copacetic. If I weren’t already here I’d call in sick. I like being me, but I’m terribly outnumbered. I’d never want to be a billionaire, but I dare anyone to offer me the position. My sister Cruella stopped over for a few days. She gained a few pounds over the winter. Winter weight. She became aware of it when she squeezed into a pair of her old blue jeans. She asked me, ‘Do these jeans make me look like the side of the house?’ I was sensitive to her plight. I assured her that the house was more faded. She decided to punish me by cleaning my house and making me help. She had me wear an apron so the pain would be intensified. She told me that women love to see a man wearing an apron. That may be true, but I don’t look particularly fetching in an apron. The doorbell rang. I answered it to some guy who gave me an odd look. If I’d just seen me, I’d given me the same look. I told him that I was cleaning.” 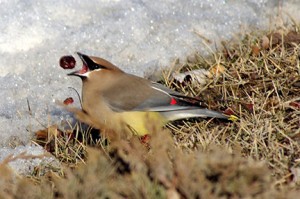 Photo of a cedar waxwing tossing a berry into the air before eating it by Julie Bronson of Glenville.

“He said that I was just the kind of man he was looking for. That’s when I met the new Avon Man.”

More here than there

We don’t have a lake that we could document as being ice-free, but my wife, The Queen B, declared the deck of our house to be snow- and ice-free as of March 30.

A Cooper’s hawk attempted to catch one of the two gray partridges strolling along our lawn’s southernmost border. The bird of prey buzzed the partridge’s tower, but there were no casualties. My wife claims that she knows an accipiter is in our yard when she hears the theme from “Jaws.”

March struggled to reach 50 degrees this year, but it made it. Snow cover makes it tough for temperatures to rise. It was good to have the warmth. I wasn’t depending on AccuWeather to provide me with nice weather. I relied on AccuMe. Rhonda Allison of Glenville sent me a cartoon of a robin with its tongue stuck to a metal post. The weather delighted me and the cartoon caused me to laugh.

Spring has sprung, the grass has risen, I wonder where the flowers are.

People are fond of watching birds run, block, tackle, kick and pass. The NFL is a flock of birds. The Arizona Cardinals are named for the northern cardinal. Cardinals are found in Arizona, but the nickname came from the original franchise, the Chicago Cardinals. The state bird of Arizona is the cactus wren. The Atlanta Falcons likely represent the peregrine falcon. The American kestrel might have been a better choice with its lovely plumage. The Baltimore Ravens come from Edgar Allan Poe’s poem, “The Raven” in which the big bird said, “Nevermore.” Ravens are brainy birds. The Philadelphia Eagles pay homage to the bald eagle. Our national emblem was removed from the endangered species list in 2007. I’m not sure of the status of the Philadelphia Eagles. The Seattle Seahawks are ospreys, fish-eating birds of prey. The image the team uses looks more like an eagle of some new kind.

The sound and the feathery

The noisy Montezuma oropendolas drew my attention as I walked about in Costa Rica. The males are vociferous birds, mainly chestnut with a blackish head and rump, and a tail showing bright yellow. There is a bare blue cheek patch and the long bill is black with a red tip. The Montezuma oropendola inhabits forest canopy, edges and old plantations. It is a colonial breeder that builds a woven sack nest of fibers and vines that hangs high in a tall tree. They prefer this tree laden with nests to be apart from other trees to prevent monkeys from raiding the nests. A wasp nest in the tree is welcomed as it offers more protection from monkeys.

“Are there black cardinals?” Phainopeplas, occasionally called black cardinals, are found in the U.S. only in the southwest. Males are black, females gray, and they remind people of cardinals.

“What do cedar waxwings eat in winter?” Cedar waxwings feed on fruits year-round. Their name derives from their appetite for cedar berries in winter when they also eat mountain ash, honeysuckle, crabapple and hawthorn fruits. In the song, “Life is Just a Bowl of Cherries,” there is a line that says, “You keep repeating, it’s the berries.” When it comes to cedar waxwings, life is the berries.

Roger Batt of Algona asks how it’s possible that someone could be sprayed more than once by a skunk. A skunk has sprayed me. OK, more than one skunk has sprayed me. It requires a certain skill set, but it hasn’t been easy for me. Perhaps I’m a slow learner, but I’ve worked at it. I think my secret is that I’ve spent a lot of time where skunks are. It helped that I got an early start when the toddler me mistook a civet cat for a barn cat. That memory still brings a tear to my eye.

In April 1991, a canceled check was sucked up by a tornado in Stockton, Kan., and carried 223 miles to a farm near Winnetoon, Neb.

The Lincoln’s sparrow is named after Thomas Lincoln, an associate of John James Audubon’s.

Bald eagles gather sticks from the ground and sometimes break branches off trees for nesting material. They use as many sticks as they can find close to the nest, but may carry some branches as far as a mile.

“The smaller the mind the greater the conceit.” — Aesop

“I wish you bluebirds in the spring to give your heart a song to sing.” — From the song, “I Wish You Love”