Morning chorus of birds is one of nature’s symphonies

“Everything is nearly copacetic. I’m so far behind, I won’t catch up if I live to be as old as a bristlecone pine. I finally got around to letting the winter air out of my tires and putting the summer air in. I was late in getting my potatoes planted. I don’t suppose it matters. It’s like slaughtering a hog on a Monday or a Tuesday. Either way, you’re going to be eating bacon. Last year, I raised potatoes as big as marbles. Others were the size of grapes. Oh, I had some small spuds, too, but overall the crop was tateriffic. I’m staying out of the garden today. I’ve been an inch off everything all day. I’m just lucky I was knighted.” 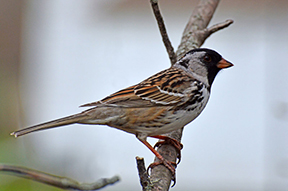 Photo of a Harris’s sparrow by Darcy Sime of Alden.

“Knighted? What’s that about? You aren’t a knight,” I say.

“Before you say something, you should make sure that it’s an improvement on the silence. I didn’t know I’d been knighted either until I heard the server at that all-you-can-eat buffet say, ‘Sir, you’ll have to leave.’ This nice weather brings fond recollections of the time I ran that marathon. Do you remember that day? You were my barely mediocre water boy.”

“Some marathon. You ran only 50 yards,” I interject.

The morning chorus of birds has been called nature’s symphony. Some mornings, it’s more of a jazz-like potpourri.

Robins feed heavily on the wet ground. Red-breasted worm munchers. Long-winded robins sing early in the day and early in the year. They are extraordinary songsters.

A yellow warbler flits among the fallen branches in my yard. A bright yellow, tiny fellow that my father called the summer warbler.

The sun was hiding behind rain clouds, but when given the opportunity to shine, was very hot. Soon, drivers will consider shade when selecting parking places. Leaving the car windows open a crack will become a good idea.

I’ve been spending more time inside than I’d like, but with so many bald eagles about, my goldfish has been looking worried.

It was sunny. The brightness enhanced the beauty of the goldfinches, grosbeaks, buntings and orioles feeding at the troughs. A Harris’s sparrow brightened my day. A little bit of sun is better than a lot of none.

A reader from Ohio sent this recipe for feeding the birds. Mix 1 cup of creamy peanut butter, 1 cup vegetable shortening, 1 cup white flour (not self-rising) and 3 cups yellow corn meal (not self-rising). Make a suet log from an 8 to 12 inch long branch that’s 3 to 6 inches in diameter. Drill a few 1-inch diameter holes to a depth of 1 inch in the log and smear the mixture into those cavities. Attach an eye screw to the top of the feeder and hang the feeder within eyeshot.

Kim Williams of Grundy Center asked if coots land in trees. I’ve been to a gnat roping and once saw a chicken chew tobacco, but I’ve never seen a coot in a tree. And I’m an old coot. I checked with a friend of a former neighbor’s uncle who once worked with a fellow for six weeks who’d read about a guy who manages a supermarket who had seen everything, and he hadn’t heard of a treed coot. A coot is capable of perching in a tree, so I’m sure others have seen a mudhen in such a location. The American coot doesn’t have webbed feet like a duck. Each of the coot’s toes has broad lobes of skin that help propel it in water. The lobes fold on land, so they don’t impede walking. A coot runs noisily along the water’s surface until it gains sufficient momentum to fly. Actually, I’ve seen many coots in trees. In eagle nests. They’re a favorite prey of bald eagles. I’ve seen a good number of Canada geese in trees — both perched and nesting.

Tom Ehrhardt of Albert Lea said that while driving through Iowa during our reluctant spring, he saw many dead deer on roadsides. He suspected it was because the only green vegetation available for food was found in road ditches and cemeteries. Iowa has a lot of roads and many deer. Spring has fewer car/deer collisions than does fall. November has the highest rate of these collisions. Deer are in rut then. Cars may be, too. The harvest removes primary hiding spots in cornfields and daylight hours grow shorter, meaning dawn and dusk (deer are crepuscular) coincide with the times when people are commuting to and from work. According to State Farm’s most recent report, West Virginia is the state where a driver has the greatest chance of colliding with a deer (1 in 40 annually). South Dakota, Iowa, Michigan and Pennsylvania round out the top five states with the most risk of a buck-to-bumper banging. Watching for deer crossing signs can help; deer whistles mounted on bumpers won’t.

“Do people really eat opossum?” Some do, but not me. Unless the meat in Mom’s mystery stew was…nah.

Granny Moses on “The Beverly Hillbillies” was fond of “possum and grits.” Granny gave good advice like this, “Elly May! Don’t spit from a moving vehicle. Wait till it’s stopped.” I was eating in Carl’s Corner in Essig one day when I saw the sign reading, “Possum, the other white meat.”

“I saw a crow feeding on a dead deer today.”

“Crows kill a lot of deer.”

Located at the end of Oregon Street in Albert Lea is more than 10 acres of oak savanna — burr oak interspersed among prairie grasses. Loren Kaiser mows the 1.9 miles of walking trails that are open to the public.

Ride on the Pelican Breeze

“The question for each man is not what he would do if he had the means, time, influence and educational advantages, but what he will do with the things he has.” — Frank Hamilton

“We do not see nature with our eyes, but with our understandings and our hearts.” — William Hazlitt