Walking is similar to reading a book with your feet 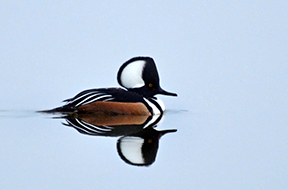 Photo of a hooded merganser by Darcy Sime of Alden.

“Everything is nearly copacetic. I’m not much, but I think about me often. If I were any more handsome, I’d have to be twins. I’m ambidextrous. I can eat sugar with either hand. I’m trying to curb my appetite, but it’s not easy. When I eat chicken, I don’t stop at the bone. The waitress brought my check yesterday and I ate it. Remember the year I went to the garage sale and bought a roller skate for 50 cents? It was in pretty good shape.”

“As I recall, you spent that summer skating in circles,” I say.

“My uncle Crowley has hearing aids. Sometimes, when I’m talking to him, I say every other word just to mess with him. Crowley smoked cigarettes. He smoked a brand in which each pack came with a coupon that could be redeemed for merchandise. He smoked for so many years that he was able to turn the coupons into an inflatable raft that he never had enough wind to blow up. That bothers him to this day. He’s experienced several floods. He never stops talking about them. When he dies and goes to heaven, he said he’s going to be telling everyone about his experiences. I told him it was a bad idea. Noah will be in the audience.”

On a veery nice trail

I led a bird walk at a state park far from my home. I love walking. It’s like reading a book with my feet. Pelicans flew low enough overhead that I could hear their wings whistling as if they were made from corduroy. A veery, a tawny thrush, sang its beautiful ethereal song, flutey and fine. I thanked my lucky stars that I was able to hear it.

My view outside early on May 14

There’s gold in them there feeders

Nancy Rosenberg of Albert Lea called to express her amazement at the number of goldfinches in her yard. If we don’t complain too much about winter, we are given gold in the spring – goldfinches. Nancy must have suffered winter gladly. The lively chatter of what my father called “wild canaries” causes me to fill the feeders with nyjer seed (also called thistle seed). I want to comfort the joyous.

Vic and Gail Savick of Freeborn informed me that they’d found dead purple martins after the epic May snowstorm, spring in a snow globe. Our largest swallows, purple martins perform aerial acrobatics to catch flying insects. John James Audubon used the presence of purple martin houses to help him find his lodgings for the night. He said, “Almost every country tavern has a martin box on the upper part of its signboard; and I have observed that the handsomer the box, the better does the inn generally prove to be.”

Duane Swenson of rural Waseca watched a Canada goose chase a turtle away from a nest near Duane’s farm pond. A gander can get a little cranky and this one had goslings in the nest. It would attempt to chase away any creature that ventured too close. The painted turtle is the most common turtle here. They are commonly called “mud turtles.” The painted turtle is an omnivore (eating both plants and animals) that feeds on insects, snails, slugs, crayfish, leeches, mussels, tadpoles, frogs, fish eggs, fish, carrion and plants (including duckweed, algae and lily pads). Common snapping turtles would be more of a threat to a small gosling. They, too, eat both plants and animals. Potential foods include insects, fish, clams, crayfish, snails, worms, frogs, tadpoles, salamanders, snakes, turtles, birds, various small mammals, carrion and aquatic plants. In June, female snapping turtles travel to areas suitable for nesting and often cross roads.

“Are rabbits rodents?” They are not. They are lagomorphs. Rodents have two long front incisors that grow continuously and must be worn down through gnawing. Lagomorphs have two pairs of incisors. All of a lagomorph’s teeth grow throughout its life and are ground down by eating vegetation.

“How did you develop such an interest in nature?” When I was a boy, people were always telling me to take a hike.

Although cutting down trees and clearing land had tormented the pioneer settlers; they looked with suspicion on any land that didn’t have to be cleared. They reasoned that if the prairie couldn’t grow trees, it couldn’t be of any value for growing crops.

Each bur of the cocklebur contains two seeds that never leave the fruit until germination. The lower seed germinates under normal conditions of moisture and temperature. Germination of the upper seed can only occur if the seed coat is punctured, removed or allowed to decay over time. If farmers bury the bur during cultivation, the upper seed goes dormant and germinates when cultivation brings it to the surface again.

The last lakes to lose their ice in Minnesota last year were Lake of the Woods, Rainy Lake and Greenwood Lake, which became ice-free during the second week of April.

The weeping willow is a native of China.

“I am beginning to learn that it is the sweet, simple things of life which are the real ones after all.” — Laura Ingalls Wilder

“For peace of mind, we need to resign as general manager of the universe.” — Larry Eisenberg