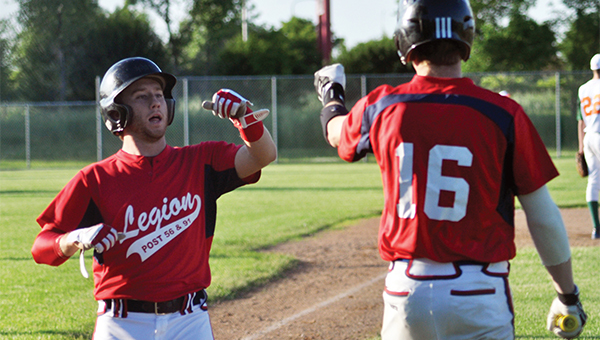 AUSTIN — Slowly but surely, a group of baseball players who used to concentrate on beating each other while playing for the Albert Lea High School and Austin High School squads are starting to come together as one team.

The Albert Lea/Austin Legion baseball team split a doubleheader Tuesday with Kasson-Mantorville by winning the opener 9-2 and dropping the nightcap 8-5 in 10 innings. 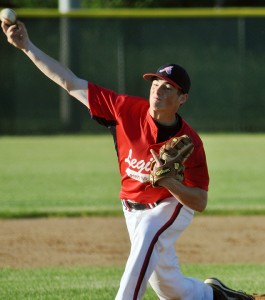 The biggest thing the team gained was time together, which will only make them more comfortable with each other.

“It’s a lot better than what I thought it would be,” said Johnathan Fleek, who went 4-for-7 with a double and two RBIs. “They have some good players and we do too. We showed we can work together, even if we’re rivals. Everyone was hanging out with their own town at first, but then we kind of got used to each other.”

Every player on the roster got a chance to play on Tuesday as the team is trying to figure out its identity. It’s a different experience for players that are used to starting at one position all season, but it’s one they’re willing to deal with.

“Everybody’s been around in the order in one way or another and we’re playing different positions,” said Marcus Stoulil of Austin. “With a combined team, that’s what we’re going to have to do, and once the games start mattering more, it’ll come together.”

Albert Lea/Austin (1-3 overall) used a seven-run rally in the fifth inning to win game one. Gabe Kasak and Marcus Stoulil each came up with two-run singles, and Zach Huntley drove in another run to put the home team up 8-2.

The second game went back and fourth as Albert Lea/Austin scored in the seventh on a sacrifice fly by Gabe Kasak, but it couldn’t knock in the winning run even though it had the bases loaded with one out. Albert Lea/Austin again tied the game at 5 in the bottom of the eighth, when Fleek knocked in a run with two-out single.

Kasson-Mantorville finally took control of the nightcap when it tallied three hits and drew three walks in the top of the 10th. Albert Lea/Austin had the bases loaded with two outs in the bottom of the tenth and Kasak flew out to left field.

“We are in no way, shape or form trying to get the best nine players on the field together. That’s not the goal right now,” Stratton said. “As the season progresses we may evolve into that, but that’s not where we want to be now.”

Stoulil said that he sees potential in this squad to be solid by the end of the season when everyone’s roles are established. But right now, the team is still trying to get to know each other.

“There’s a few of us from both towns trying to get kids to ease up a bit by being ourselves and playing baseball,” Stoulil said. “I see a lot of potential. We have so much versatility. We have five or six solid pitchers and everybody can play three or four positions.”

The roster of 18 players has created some new problems for the coaching staff. While it used to be tough to find enough players to fill up a roster, the coaches must now decide who plays and who sits.

“We went from the frying pan into the fire,” Stratton said. “For the past couple of years, you were counting heads and everybody that showed up played. Now we’re in the other direction, but it’s good. The alternative, which would be not having a team, is not good.”