Winter’s departure means so many more things to see

“Everything is nearly copacetic. As a boy, I didn’t know what to do. Now I know what to do, I’m just too tired to do it. I told Still Bill, who long ago exhausted any interest he had in work, that the only place where success comes before work is in the dictionary. He said that play comes before both of them. One of my brothers came over yesterday. He’s the one who takes extra long steps in order to keep from wearing out his $50 shoes and rips the seat out of his $75 pants in the process. He told me that he was in a terrible pickle. He was strapped for cash and didn’t have the slightest idea who he was going to ask for a loan. I was glad to hear that. I was afraid he was going to try to borrow money from me. He ekes out a living as a musician. I remember when Grandpa gave me an accordion. I made some good money with that.” 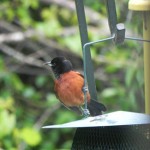 Photo of an orchard oriole by Al Batt.

“I didn’t know you played the accordion,” I wondered aloud.

A drive can be long. Winter’s reluctant departure leads to not only better driving conditions, but to more things to see.

We watch farmers flex their tractors. We identify birds on the wing.

We used to count horses on drives. We’d each get one side of the car. Whoever counted the most horses won.

Now my wife and I count hawks instead of horses. We both win.

I was birding in the Carrington, N.D., area when I watched marbled godwits fly over. Another birder, Fred Chancey of Eugene, Ore., told me that a friend of his called them garbled modwits. A Spoonerism at its best.

I was assisting on a birding trip during the Potholes and Prairies Birding Festival. As might be expected, we stopped in a prairie and pothole area. It was windy and devoid of traffic other than the two buses I was involved with.

After exiting the bus, I stopped to listen.

“What are we listening for?” asked a nine-year-old member of the group.

A second question came quickly. “Then why aren’t we hearing any?”

Nature isn’t a place to visit. It’s where we live. It’s home.

A skunk waddled near some friends and me while we were up to some mischief-making. “Walk for your lives!” I yelled and we all strolled to safety.

I led a bird walk at Banning State Park in June. We looked at flowers along the trail. The trilliums were in abundance. Trillions of trillies demanded our attention. Some of the flowers were beginning to fade. One in my group, Mary Ellen Vetter of Minneapolis, called them senior flowers.

“Will a great horned owl kill and eat another species of owl?” Yes, all except the snowy owl.

“How often are Cooper’s hawks successful in capturing a bird?” Studies have shown they have good luck about 16 percent of the time.

“How fast do hummingbirds fly?” They move at 20 to 30 miles per hour in regular flight while propelled by 60 to 80 wingbeats per second. A ruby-throated hummingbird’s heart beats 500 times per minute during that time.

“Why don’t birds have teeth?” Birds don’t have teeth because the teeth and the jawbone required to support them would be too heavy for efficient flight. Many birds have a series of notches in their beak or spikes on the inside of their beak or tongue. These notches and spikes aren’t true teeth.

“What is our largest bird?” That depends whether you refer to  Minnesota or the United States. If you mean Minnesota, it depends on how you define largest. The largest bird in weight is the trumpeter swan, which hits the scales at 20 to 30 pounds. The largest bird by wing span is the American white pelican, with a wing span of 9 feet. Pelicans don’t weigh as much as the swans. If you’re asking for the country, the California condor is considered the largest bird. It has a 9 to 10 foot wingspan and weighs 18 to 31 pounds. This condor lives as long as 60 years in the wild.

“If blue jays look identical, how can they tell by looking who is a male or female?” Birds can see in certain light frequencies, including ultraviolet, that we cannot. This light is used to communicate species and gender. I’ve read that a male blue jay has a pattern on his wing that’s lacking on a female.

“Why don’t I see as many sparrow hawks as I used to?” There are a number of reasons that the population of American kestrels may be declining. Some researchers think the culprit might be the Cooper’s hawk, a predator of the kestrel, whose numbers are increasing. Other scientists doubt this is a major factor. Pesticides and habitat loss are other possibilities.

“A life spent making mistakes is not only more honorable, but more useful than a life spent doing nothing.” — George Bernard Shaw

“It is interesting and encouraging to see how the whole world is waking up to our interest in birds. I’m so glad of it — it makes one hope something may be done to preserve them.” — Olive Thorne Miller