Funeral services for Brenda Ann Avelar of Albert Lea will be at 11 a.m. Tuesday at St. Theodore Catholic Church in Albert Lea. Visitation will be from 4 to 7 p.m. Monday at Bonnerup Funeral Service, Albert Lea, and one hour before the service at the church. 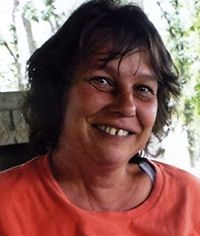 Interment will be in St. Theodore Cemetery.

Brenda died surrounded by her family on Thursday, July 25, 2013, at Mayo Clinic Health System in Albert Lea. She was 52.

She attended Freeborn and Wells public schools. She was a member of St. Theodore Catholic Church, In Country Veteran’s Motorcycle Group and was a life member of the DAV and VFW auxiliaries.

Brenda enjoyed camping, bingo, cards and trips to the casino.

She was especially proud of her grandchildren and her family always came first in her life.

She was preceded in death by her mother Opal Gulbertson, stepson Little Joe Avelar, mother-in-law Ventura Avelar, grandparents; brother-in-law Edwin Boerner and many aunts and uncles.