“Everything is nearly copacetic. I didn’t sleep well. I have short eyelids. The only way I can close them is by frowning. If I frown all night, I wake up cranky. My sister Cruella picked me up yesterday. She wanted me to go with her while she looked for a new car. I went because the farthest I’d traveled during the week had been to crawl under a corncob looking for eggs. I don’t like riding with her. She speeds, tailgates and talks on the cellphone constantly. She gets off the phone only to honk at other drivers who irritate her. We were pulled over by a police officer.” 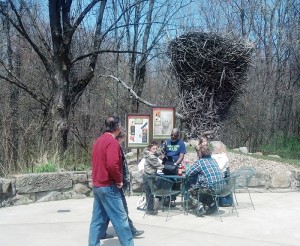 “Because Cruella was speeding?” I say.

“No, he saw the ‘What Would Jesus Do’ bumper sticker, the ‘I ride with the Lord’ license plate holder, the ‘Follow Me to Sunday School’ sticker and the chrome-plated Christian fish emblem on the trunk, so he naturally assumed she’d stolen the car. Things got worse. Cruella knew a shortcut. That road had been closed in order to repair a collapsed sewer line. Cruella doesn’t believe ‘road closed’ signs. So down the road we go until we come to the point where there was no road. What there was, was a sign reading, ‘We told you so.’”
Naturally

Picking up sticks from the edge of the woods in the backyard is an endeavor otherwise known as trolling for mosquitoes. I noticed that some of the weeds needed flowering.

I’d watched a baseball game in Winnebago. Eurasian collared-doves cooed for most of the game from perches high on the field’s light towers.

Christian, a Minnesotan by choice having moved here from Florida, called to tell me that he’d found a young bird at his employer, Burger King. That was nice of Christian, so I stopped by the fast food establishment and picked up an immature common nighthawk. I saw that it wasn’t far from flying. I had a decision to make — release the bird on a nearby flat, graveled roof or haul it to the Wildlife Rehabilitation Center in Roseville. I decided to place it on a roof thanks to the kindness of Jon Rettke, who offered the cover of his service station. Upon release, the bird decided on another location. It flew high into the air in graceful loops, flashing white patches on wings and landed atop the Morris Furniture building. Where I hope it began a new and wonderful life.
Fishing grackles

Jim Grotte of Fairmont wrote, “On a small dam on Amber Lake in Fairmont, I watched grackles catch, carry away and eat small minnows. The fast water would occasionally push a minnow to one small area on the spillway where there was room for only one bird at a time. Several grackles were lined up on the wall above the spillway, each waiting their turn.”

“Do we have chiggers here?” The chigger is a scourge of summer. There are always enough chiggers to go around. They are generally not common in Minnesota, but their bites are annoying. Chiggers are the immature larvae of trombiculid mites. They are reddish, yellowish or orange, and nearly invisible to the naked eye. Chiggers are found in grassy, weedy and shrubby areas, especially in wet locations. When chiggers hatch, they climb on foliage and grab people or animals that pass. When they latch onto a person, they attach themselves to skin. Despite popular belief, chiggers don’t burrow into skin or feed on blood. They feed externally on partially digested cells broken down by their saliva. Liquefied skin. Yummy. The itchy bites are particularly common in areas where clothing is tight and where skin is thin, often at the openings of hair follicles. The majority of chigger bites occur below the waist. You could test an area to determine if chiggers are present by holding a piece of dark-colored cardboard upright with an edge on the ground. Chiggers will climb to the top of the cardboard and show up against the dark background. Try relieving the irritation of the bites with an anti-itch medication.

Several callers asked how to get skunks out from under a porch or deck. I recall the day Weasel and Scooter were talking. Weasel complained about skunks living under his porch. Scooter told him to throw some lutefisk under there. A week later Scooter asked Weasel if the skunks were gone. Weasel replied, “They are, but now I have Norwegians living under there.”

So don’t use lutefisk to discourage skunks.

Skunks take advantage of cavities under decks and porches to raise young. They leave when the young are old enough. The simplest solution is to wait for the skunks to leave on their own and then seal the entry with something like hardware cloth. There are some commercial products that claim success, but I cannot attest to their efficacy. Once you see the babies come out with their mother, seal the entry. Put a layer of flour outside and inside the entry. Any footprints in the flour should be outside the door with none inside. You could also put wadded newspaper or other loose material (leaves, dirt, etc.) in the hole. If the newspaper hasn’t moved for three to four days, the den has been vacated. If it’s been moved, they are out. Seal the entry. A fence around the deck or porch might be warranted.

Connie Hoyne of Albert Lea asked if mallards renest. A mallard nest is five to 15 eggs that are incubated from 23 to 30 days. Renesting is common after a loss of a nest. The second clutch size is typically reduced. Once the newly-hatched ducklings have dried, the mother leads them to water. The drake/hen pairing forms in the fall, but the male plays no role in raising the babies. He isn’t the one that quacks. The female is.

“More important than talent, strength or knowledge is the ability to laugh at yourself and enjoy the pursuit of your dreams.” — Amy Grant

“If you want to see birds, you must have birds in your heart.” — John Burroughs