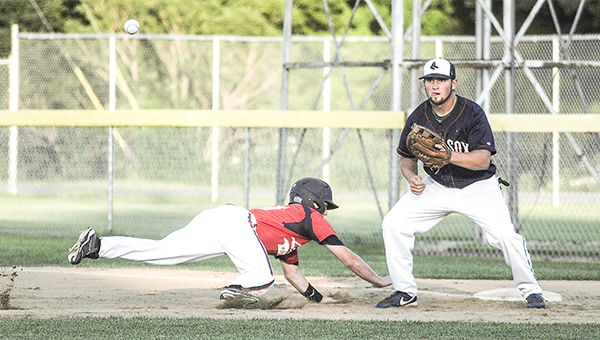 Albert Lea/Austin’s Johnathan Fleek dives back to first base as Austin Blue Sox first baseman D.J. Taylor attempts to pick him off Tuesday night at Marcusen Park in Austin. Fleek was one for four with one run scored and a walk. — Eric Johnson/Albert Lea Tribune

The Blue Sox (10-8 overall) jumped out to an 8-2 lead after five innings, but Albert Lea/Austin held them scoreless the rest of the way. 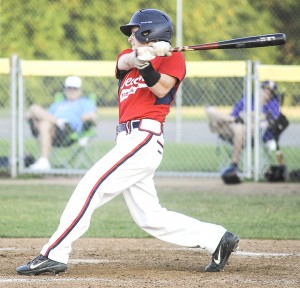 “We knew it was just for fun,” said Huntley. “We came out and we played well. We were relaxed, and I think that’s what we’ve got to do from this point forward.”

“We don’t really want to go to Winona, and if we can win one game maybe we can get a home game,” Huntley said.

Steven Clennon took the loss on the mound for Albert Lea/Austin as the Blue Sox scored three runs in the third and fifth innings.

Albert Lea/Austin has an overall record of 8-12.