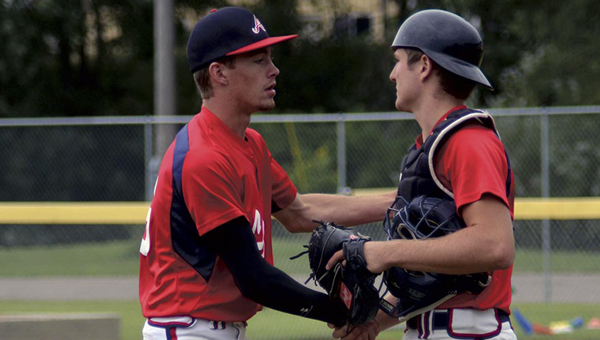 But Stoulil put that slump to an end when he pitched a three-hit shutout and the Albert Lea/Austin American Legion team beat Faribault 4-0 in an elimination game at Marcusen Park Saturday.

“I didn’t want to think about,” Stoulil said about his bad luck in the postseason. “After so long you’re thinking we’ve never made it out. I just said I’ve got to go out there and do what I can. I’ve got a good defense behind me and they made plays.”

Albert Lea/Austin will now play Winona in another elimination game at 7 p.m. tonight in Marcusen.

Stoulil struck out 12 and only faced one jam, which was in the fourth inning when Albert Lea/Austin had a 2-0 lead. Faribault loaded the bases with one out on a walk and two singles, but Albert Lea/Austin shortstop Jonathan Fleek turned a double to end the frame.

Stoulil retired the last 12 Faribault hitters in order to end the game.

“This is more like it,” Stoulil said. “It’s really nice to be able to throw well and get through games. I can’t do it without help behind me. I can’t strike everybody out.”

Albert Lea/Austin got on the board when Zach Huntley reached on an error and Gabe Kasak, who doubled to start the frame, scored from second. In the third, Stoulil put Austin up 2-0 with a two-out RBI single up the middle.

Albert Lea/Austin went up 3-0 in the fifth when Fleek grounded out to score a run and Huntley knocked in a run with a single to right field in the eighth inning.