When pigs carry sticks, the clouds will play tricks

“Everything is nearly copacetic. I lost my part-time job at the creamery. The boss said I was always in the whey and wasn’t punctual. I told him that I was a big believer in punctuation — especially question marks and exclamation points. At least now I won’t have to worry about being bumped into a higher tax bracket. Life’s a journey and I don’t travel in first class. Speaking of travel, do you remember when we went to Alaska and there was an earthquake on my birthday?”

“I do. It was your birthday quake,” I reply.

“And we went to a restaurant in a town too small to have a name. The eatery claimed its specialty was serving soup to nuts. The owner said that because it was my birthday, I’d get a free meal if I filled out a job application.”

“I remember it as if it were the day before yesterday,” I say.

“I never got that free meal.”

“That’s because where the form asked you to put down the name of the high school you attended…” I try to explain.

“I put it down. NRHEGBOMSCBHTLHCGFVMWBLMLSOL, the home of the fighting Alphabets.”

“Yes,” I interject. “But it also asked for the dates attended.”

“I wrote those down, too. Monday, Tuesday, Wednesday, Thursday and Friday.”

The Ann W. Richards Congress Avenue Bridge in Austin, Texas, is home to the world’s largest urban bat colony. The Mexican free-tailed bats reside beneath the road deck in gaps between the concrete component structures. They are migratory, spending summers in Austin and winters in Mexico. Between 750,000 and 1.5 million bats live underneath the bridge each summer. The nightly emergence of the bats from underneath the bridge at dusk and their flight across Lady Bird Lake to feed, attracts as many as 100,000 tourists annually. Each evening, around sunset, the bats emerge like a winged cloud spiraling from the crevices of the bridge. Scouring the countryside in search of food, it’s estimated that the bats consume from 10,000 to 30,000 pounds of insects each night.

When pigs carry sticks, the clouds will play tricks.

If the birds be silent, expect thunder.

“How old are pelicans when they breed?” They are 3 to 4 years old. An American white pelican of breeding age develops a nuptial tubercle, a kind of breeding bump on the upper bill. 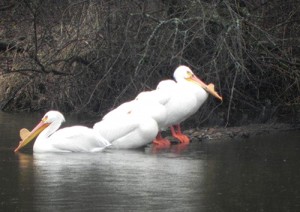 Photo of nuptial tubercles on pelicans by Al Batt.

“What animal is attacking my garden?” I can’t say for sure, but there are clues to look for that might determine the culprit.

Deer leave ragged bites, typically a foot or more above the ground.

Rabbits clip stems cleanly at an angle a few inches above the ground.

“I saw a brown eagle trying to catch a fish. I thought it was a young bald eagle, but it looked bigger than one. What could it be?” If it was fishing, it was likely a young bald eagle. First-year bald eagles have longer flight feathers than their parents to aid them in flying.

“The frogs were croaking loudly in the spring until I walked to the pond. Then they all became quiet. Was it me?” It is you. Somebody needed to tell you that. And if, by odd chance, it’s not you, it’s someone very much like you. The male frogs, although talkative, are as all males are, good listeners. And you, my friend, are a hulking giant to them. They hear you coming because you don’t pick up your feet. You know how you are. And if they all don’t hear you, one might and he becomes silent. The other male frogs, being good listeners, are silent until they figure out what is bothering their buddy. The frogs likely heard a twig snap or felt the earth move. Science has discovered that frogs are sensitive to substrate vibrations and that being males, they’re sensitive. Scientists came up with the first part of the previous sentence. I added the second part, because I’m sensitive.

“What kind of bird is a rook?” It’s a bird that may move any number of unoccupied squares in a straight line, horizontally or vertically. No, wait a minute. That’s a chess piece. The rook is an abundant black Eurasian bird of the crow family. John James Audubon, who pursued an interest in the genetic traits of birds, raised a colony of European crows. One day, a friend asked Audubon, “Bred any good rooks lately?”

“What causes swimmer’s itch?” Swimmer’s itch is a skin rash caused by an allergic reaction to microscopic parasites that are carried by snails and sometimes waterfowl.

When I joined the local Audubon chapter long ago, one of the first members I got to know was Edna Aakre. She was amazing. Edna died recently. I never had Edna in the classroom, but she was still one of my favorite teachers. I cherished her friendship and will cherish her memory.

“We abuse land because we regard it as a commodity belonging to us. When we see land as a community to which we belong, we may begin to use it with love and respect.” — Aldo Leopold