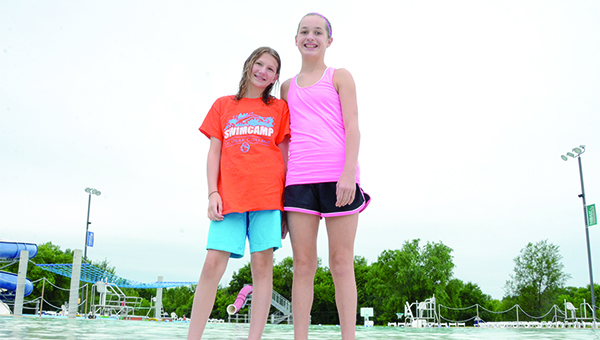 Atlantis Swim Federation’s Abby Larson, left, and Emily Taylor will be competing in the Central Zone 14-and-Under Championship in Topeka, Kan., from Friday through Sunday. Larson will swim in the 50-, 100- and 200-meter freestyles and Taylor will compete in the 50 free. Taylor is from Albert Lea. — Brendan Burnett-Kurie/Faribault Daily News

FARIBAULT — Soon, Abby and Emily won’t be in Minnesota anymore.

They’ll be in Kansas.

Abby Larson, 10, of Faribault and Emily Taylor, 12, of Albert Lea will represent the Atlantis Swimming Federation in the 2013 Central Zone 14-and-Under Championship in Topeka, Kan., this weekend. It is the fifth straight year Atlantis has sent at least one swimmer to the regional meet.

Larson has qualified for zones in three events — the 50-, 100- and 200-meter freestyles — while Taylor swam a zone time in her final time trial of the season to slip into the meet by one hundredth of a second in the 50 free.

“I’m excited for the experience,” Larson said. “(Coach) Mark (Vininski) just tells us to have fun.”

“And enjoy it,” Taylor added.

Both are coming off last weekend’s Minnesota Swimming Long Course State Championship at the University of Minnesota. Larson had three top-10 finishes and swam zone times in the same three events. While she was fifth in the 50 free and sixth in the 100 free, Vininski said it was her 10th-place finish in the 200 free that most impressed him.

“She swam that race really well with a girl who was faster than her and she hung with her and kept pace until the last 50 and then passed her and beat her,” he said. “It was a great swim. She did outstanding.”

“You just tell yourself to keep going and stay ahead of her,” Larson said. “I felt really good. I was dropping time in all my events.”

Now Larson will compete against the best 9-10-year-old swimmers from Indiana to the Dakotas. Vininski has no doubt she’ll hold her own.

“Abby swims to win,” he said. “She gets in there and she gives it her all. She listens to her coach’s advice, whether it’s me or Joey (Clapp). She listens and she takes it in and she performs.”

Taylor, meanwhile, had a tougher time getting to Zones. The Albert Lea swimmer missed the zone qualifying time while competing in the 50 free at state by just .24 seconds. So she decided to make a few adjustments to her breathing, taking fewer breaths and not breathing off her start or into her finish.

“My first swim I was nervous, but I was confident I could drop a second,” Taylor said. “After my race I felt bad and wanted to go back in. I knew I could get a zone time.”

When she finished, Taylor had to look up at the board to see if she’d made it, which she had, by the thinnest of margins.

“Everyone was cheering and I was like, ‘Yes! I made it!’” she said.

“She’s ecstatic,” Vininski said. “All smiles. She just made a couple of basic mistakes, we changed some things up and she was able to do everything right.”

Meanwhile, older swimmers Brady Bresnahan and Cecilia Hake both qualified for the Summer 2013 Senior Championship Meet starting Friday in Bismarck, N.D., but neither will compete. Lindsey Horejsi also qualified for the meet but couldn’t swim her top events due to her qualifying times being too fast.

At state, Atlantis’ program-record 12 swimmers finished 30th out of 47 teams with 114 points. The Aquajets Swim Team won the state championship with 5,276.5, beating out the second-place Rochester Swim Club Orcas. Among Division A teams, Atlantis was 10th. Riptide Swim Club was the top Division A squad with 707 points.

“The whole team went great,” Vininski said. “That’s great, that’s where I want to be. We’re doing well. I’m happy with where we are.”