“Everything is nearly copacetic. I have nothing and it has been whittled to a fine point. I’m thinking of having laser surgery. Maybe it would help me find my eyeglasses when I’m not wearing them. I’m still using John Wayne toilet paper. That stuff won’t take any you-know-what off anybody. I drove to the cities. The traffic was stupid busy. They should allow only the cars that are completely paid for to use paved roads. I ate at an ethnic restaurant, but of all the things that could be used to eat rice, how did they ever decide on sticks? My garden is fair to middling this year. I’ve been carrying in enough tomatoes that my back is sore. I guess that’s why they’re called home-groan tomatoes. Doc Splint Eastwood is mad at me.” 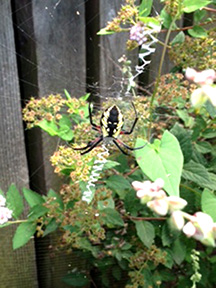 Photo of a yellow garden spider by Gail Batt.

“I told him that he was a quack and he got all mad. I thought he knew. But what angered him was that I was a month late for my appointment.”

“No wonder he is unhappy with you,” I interject. “What was your excuse?”

“I was just following his orders. He told me that it would help my high blood pressure if I avoided the people who irritate me.”

Someone wisely said that decisions are made by those who show up. Whoever said it, I think that’s true. It even applies at the bird feeder. I like the goldfinches, chickadees, house finches, nuthatches, woodpeckers and blue jays that show up at my feeders during every month of the year. I feed black oil sunflower seeds because they all like them. Those birds show up. They make the decision as to what I’m going to feed the birds.

“Why don’t I ever see any baby coots?” American coots build floating nests in marshes or shallow lakes. The nests are almost always associated with dense stands of vegetation such as reeds, cattails, bulrushes, sedges and grasses. It’s not often built on the edge of a stand of vegetation, where it would be clearly visible. The female lays nine to 12 eggs. The chicks hatch covered in down, alert and ready to leave the nest within six hours of hatching. American coot chicks have black bodies with bright red head and beak and orange plumes around the neck. I suspect the coot is nicknamed “mud hen” because of the way its head bobs when it walks. Some hunters maintain that it is called a mud hen because it tastes like mud. I read somewhere that folklore said that coots didn’t migrate. People thought coots burrowed into the mud for the winter and emerged in spring, earning them the moniker “mud hens.” Whether called coots or mud hens, they are a favorite prey item of the bald eagle.

“I was using a flashlight in the garden and saw tiny glowing eyes. What could it have been?” It sounds like a wolf spider. They have eye shine much like a cat’s eye reflects light. Wolf spiders are moderate to large-sized spiders (¼- to 1-inch long) with dark brown and slightly hairy bodies.

“How does the state do its pheasant counts?” Since 1955, the Minnesota DNR has conducted annual roadside surveys during the first two weeks of August to estimate pheasant abundance. All pheasants observed while driving 152 survey routes are counted. DNR staff survey the 25-mile long routes in the early mornings on days with clear skies and light winds. The surveys provide an index of relative abundance.

“When is a watermelon ripe?” This is a question that has confounded man for as long as we have been capable of being confounded. Most melon varieties are ripe when the stem that attaches the melon to the vine becomes brown and crisp. Try piercing the melon skin with your fingernail. If this is easy to do, it’s ripe. The spot where the melon touches the ground is usually yellow when ripe.

“What are the caterpillars on my dill?” They are likely black swallowtail butterfly caterpillars. They feed on carrots, dill, fennel, parsley and Queen Anne’s lace. When they hatch, the caterpillars look almost like bird droppings. As they grow, they are black and have a white stripe. Then they become a larger green and black. They are eating machines as are most caterpillars.

“I saw a large black and yellow spider on a large web near my garden. What is it?” This is the beautiful yellow garden spider, also called the black-and-yellow argiope or writing spider. It is a large orb weaver spider. As with many spiders, the female is much larger than the male. The spider’s large web often has an area in a zigzag pattern, called a stabilimentum, that resembles dental floss. The purpose for this is up for conjecture, but is thought to provide camouflage for the spider, attract flying insect prey by reflecting ultraviolet light, or as a warning to birds to avoid the web.

“How long do great horned owls feed their fledglings?” For up to five months.

“When do purple martins reach breeding age?” Martins are sexually mature in their second summer.

Dave Swanson of Glenville asked if feeding hummingbirds in the fall will keep them from migrating. It will not. There are a number of factors that trigger the urge of hummingbirds to migrate, but the most significant one is day length. When the days get shorter, the hummingbirds move on, regardless if there are feeders or not. Keep the feeders for a time after you’ve seen the last hummingbird just in case there are stragglers in need of energy to complete their long journey south.

Eating bananas will not attract mosquitoes and taking vitamin B-12 will not repel them.

“The only people with whom you should try to get even are those who have helped you.” –John E. Southard

“To learn how to identify a bird by its general outline, markings and behavior as a species belonging to a certain family or order was a new and thrilling occupation, and so it remains, I think, forever new, forever thrilling throughout life with every watcher of birds.” – Louise de Kiriline Lawrence