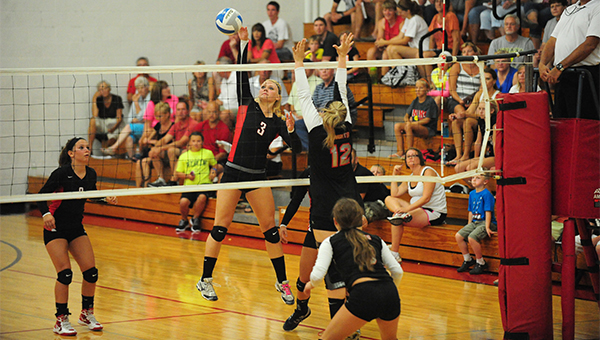 NEW RICHLAND — The momentum swung to the Alden-Conger volleyball team in Game 3, but New Richland-Hartland-Ellendale-Geneva reclaimed it in Game 4. 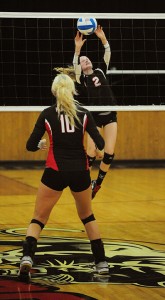 Erika Bute, a seventh grader from Alden-Conger sets the ball as Paige Overgaard of New Richland-Hartland-Ellendale-Geneva gets set to play defense. Bute had one kill and three ace serves. — Micah Bader/Albert Lea Tribune

With a 25-15 Game 4 win, the Panthers held off the Knights 3-1 on Tuesday in the season opener for both teams.

NRHEG returned senior middle hitter Carlie Wager, who had what would be a double-double in basketball: 19 kills and 11 digs. However, the Panthers were unsure what to expect at the setter position.

“We lost a talented setter from last year, and we had two sophomores step in,” NRHEG head coach Onika Peterson said. “They did a great job for us.”

Anna Lundberg and Hailey Schuller split time as the Panthers’ setter. Both players had well rounded games. Lundberg posted 21 assists along with four ace serves and three digs, and Schuller totaled 10 assists, five digs and a pair of aces serves.

NRHEG jumped out to a two-game lead, but Alden-Conger fought back in Game 3. The Panthers led 6-0, but a kill by Knights senior middle hitter Brittany Waters pulled Alden-Conger within three points, and the Knights gained enough confidence to knot the score at eight. 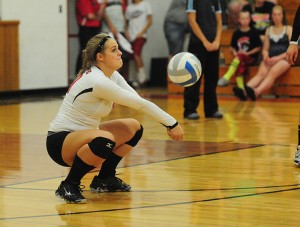 Remi Wayne of New Richland-Hartland-Ellendale-Geneva wears her libero jersey Tuesday and gets a dig. Wayne had two digs and a kill during the Panthers’ 3-1 win over Alden-Conger. — Micah Bader/Albert Lea Tribune

“Brittany stepped up to the plate,” Alden-Conger head coach Jolene Bute said. “She did a great job and filled her role as a senior.”

Alden-Conger took its first lead of the game (11-10), as libero Karina Skov served. After several lead changes, the Knights won on a NRHEG spike that landed out of bounds.

“We’ve got to work on finishing the whole game,” Peterson said. “Alden’s got a tough team, and their coach does a great job with their program.”

The Knights pushed to tie the match at two games each early in Game 4 by building a 2-0 lead, but the Panthers continued with a 20-12 run capped off with a block by Paige Overgaard.

“We had a pretty good run,” Bute said. “I’m not disappointed in the girls at all. They never gave up.”

Carlie Wagner earned the match-winning Game 4 kill to go along with a tip-over that was the game-winning hit to end Game 1.

“We had some big hits from Carley,” Peterson said.

Both teams will look to work to solidify their lineups in their second matches of the season. NRHEG will play at Albert Lea at 7:30 p.m., Thursday, and Alden-Conger will play Medford at 7:30 p.m. on Sept. 3.

Individual statistics are in the scoreboard.