The American dream not just for the birds

Gus Courrier and I have been friends for a long time. We share many interests.

Gus says that the only difference between us is that I’m cheaper than he is. He says that because he bought me popcorn. 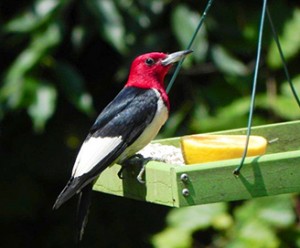 As a small boy, I knew what I wanted to be.

I didn’t want to play centerfield for the Yankees.

I didn’t want to be Matt Dillon on “Gunsmoke.”

I didn’t want to be a Tang-drinking astronaut.

There were days when I wanted to be E.B. White, a writer who leaned one word against another in an extraordinary way.

But most days, I wanted to be just like my father.

My father read the newspaper comics to me while he milked the cows in the barn. Dad told me that I should read the comics before I read the obituaries. He claimed that would extend a lifespan.

My father liked birds. He called the hermit thrush a “swamp angel,” the American goldfinch was a “wild canary,” the short-eared owl was a “bog owl,” the American bittern a “slough pump,” the mourning dove was a “turtle dove,” and the indigo bunting a “blue canary.” When the yellow-billed cuckoo called, my father called it a “rain crow” and said that it was forecasting rain. Dad knew that the tiny birds that passed through in plumages of many colors were called warblers. A neighbor referred to them as “wobblers.” I was thankful that the term wasn’t descriptive. Knowing so many birds as Dad did was pretty good because our bird book was a basic guide from “Capper’s Weekly” titled, “Introduction to Our Bird Friends.” It had 50 pages with two bird species per page. There were three our four paragraphs about each bird with a black-and-white drawing of each, followed by a short poem for each species. The book was wonderful, but it was limited in its usefulness.

Dad liked the funny pages, and he liked birds. So did he, and so do I.

When he drove the car or truck, Dad kept his hands at 10 and 2 on the steering wheel. That made it easy for him to wave. His wave was a lift of the forefinger. I’d sit behind the steering wheel of the parked car and practice that wave.

Dad was proficient at the “Minnesota goodbye.” The Minnesota goodbye is when what should be a brief process of ending a social call is extended by an hour. It starts with a glance at the time and a “Well, I suppose we should be going,” and then spirals into offers of leftovers and far-ranging topics of discussion. Conversation travels down countless detours. The departing guests are walked to the door. Visitors hang long near the door before edging cautiously through it. It’s not polite to actually leave. Often, a host walks to the car and talks to the visitors through a car window for an eternity before the departing guests drive away.

Dad was patient. He was a Cubs fan. The Cubs won the World Series in 1908. Any team can have a bad century or more, but I decided not to be a Cubs fan. Too much suffering is required.

“Flip a coin. You’ll know what you want once the coin is in the air.”

“There’s no excuse for being an idiot, so why apologize?”

“Everything will be all right at the end. If it’s not all right, it’s not the end.”

“People count the faults of those who keep them waiting.”

“If you are bored, clean the henhouse.”

Cleaning the henhouse was a nasty job. There was so much ammonia there that it was like walking into a giant Mr. Clean bottle.

Dad could plant corn straight. My rows had more personality. Dad could fix things. I was better at breaking than fixing things, but I have become like my father in many ways.

I’m frugal on my father’s side. Dad ate his Wheaties with a fork and passed the used milk to me. I thought he was cheap, now I know that he was wisely frugal.

I’ve become my father. That’s a good thing. I know what to expect.

It’s like the Bugs Bunny Overture says, “Overture, curtains, lights, This is it, the night of nights. No more rehearsing and nursing a part. We know every part by heart.”