It is generous of the world to provide such wonder

“Everything is nearly copacetic. I’m wearing my, “It’s OK to stare. I can’t believe I’m this handsome either” T-shirt made especially for me. A yellow jacket stung me right on my poison ivy rash yesterday. It fell upon me like a pride of lions on a three-legged wildebeest. That wasp was so big, he was wearing shoes. I hope it caught the rash. The Price brothers just finished shingling my house. The last one came down the ladder. I’m always happy to see a Price come down. I didn’t help them shingle. It was so hot, that I didn’t have the energy to move. Vultures were circling overhead, but I still wasn’t about to move. I was worn out from fishing. I’m quite the accomplished angler. I hooked a fish the other day that was a monster and plenty smart. The crafty devil had snuck around behind me and attached the hook to the seat of my pants. I tried to land myself for an hour before I got away. He was so big, it would have taken only five of him to make a dozen. One of my fishing buddies is moving to Missouri. I’m going to give him the best parting gift there is.” 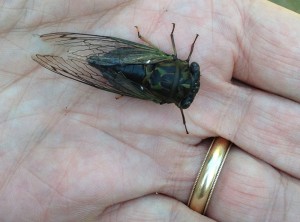 Photo of a cicada by Gail Batt.

I stepped outdoors. It was a sweet evening. My eyes went skyward, both in gratitude and in curiosity. The action there set the stage. It was a gateway to wonder. Swallows flew high in the sky, feeding on dragonflies. The day had reached new heights.

I paused to marvel. What a generous world this is to provide endless wonder. I look at nature and become too blessed to be stressed.

“I found a nest with a couple of cigarette filters in it. Whose nest was it?” I often find such things in house sparrow nests, but they might be found in the nests of a number of other species such as house finches, tree swallows, chickadees, starlings, etc. A recent study suggested that the smoked cigarette butts may function as a parasite repellent.

“How is our pheasant population doing?” A long winter followed by a cold, wet spring contributed to a significant decrease in Minnesota’s pheasant count, which declined 29 percent from 2012, according to the Minnesota Department of Natural Resources. The highest pheasant counts were in the southwest region. South Dakota had a 64 percent decrease in its brood survey. North Dakota’s most-recent rooster crowing count is down 11 percent from last year. And Iowa reported a 19 percent decrease in its August roadside count. Minnesota’s 2013 pheasant index is 64 percent below the 10-year average and 72 percent below the long-term average. The steady downward trend in Minnesota’s pheasant population during the past several years is primarily due to habitat loss. Weather has caused minor fluctuations.

High spring precipitation and below average temperatures hurt nesting this year. This year’s average hatch date was delayed to June 20, which is 11 days later than the 10-year average of June 9. The pheasant population estimate is part of the DNR’s annual August roadside wildlife survey, which began in 1955. DNR conservation officers and wildlife managers conduct the survey during the first half of August. This year’s survey consisted of 171 routes, each 25 miles long. Observers drive routes in early morning. Their monitoring provides an index of relative abundance of pheasants, gray (Hungarian) partridge, cottontail rabbits, white-tailed jackrabbits and mourning doves. Gray partridges decreased from last year and were below the 10-year average. Cottontail rabbits increased from last year, but were below the 10-year and long-term average. Jackrabbits were 87 percent below the long-term average. Mourning dove numbers were 20 percent below last year and lower than the 10-year and long-term averages.

Bob Krenik of Madison Lake asked if pelicans eat bullheads. Pelicans have a rough diet. Pelicans eat mostly rough fish, near the surface, not game fish. Some biologists claim that when the bullhead population is down, pelicans move to another lake. Their feeding is restricted to shallow water, as they aren’t diving birds. Pelicans fish communally.

Lucas Luna of Hollandale has seven hummingbirds fighting over a feeder and asked how to keep a bully from dominating a feeder. Hummingbirds are aggressive and territorial. They don’t feel the need to share. When they find a reliable source of food, they aren’t going to divvy it up amongst other hummingbirds. Put up more feeders. You can separate the feeders or cluster them together.

Harlan Lutteke of Alden asked how fast the wings of a hummingbird beat. According to the Cornell Lab of Ornithology, their wings beat 53 times per second on average.

“Is there a hunting season on crows in Minnesota?” Yes, season dates are Aug. 1 through Sept. 20, Dec. 15 through Jan. 15, and March 1-31. According to DNR surveys of small game hunters, the average annual crow harvest is about 11,500 birds.

Nancy Skophammer of Albert Lea asked for a recommendation for a bird book for a third-grader. I like “The Young Birder’s Guide to Birds of Eastern North America” written by a friend named Bill Thompson III. It was written for kids age 8 and up. It’s good because it was written after consultation with children as to what they’d like in a field guide.

“To find the universal elements enough; to find the air and the water exhilarating; to be refreshed by a morning walk or an evening saunter; to find a quest of wild berries more satisfying than a gift of tropical fruit; to be thrilled by the stars at night; to be elated over a bird’s nest or a wild flower in spring — these are some of the rewards of the simple life.” — John Burroughs

“I was strongest when I laughed at my weakness.” — Elmer Diktonius