Looking out windows is better than watching TV

“Everything is nearly copacetic. I slept on my alarm clock last night. I wanted to be on time. I need to lose some weight, so I got a haircut. Conan the Barber has a sign in his shop that reads, ‘Not an ear lost in 187 days.’ The scalping didn’t take off much weight. I should start exercising, but why punish my entire body because of a few pounds? I’ve tried dieting. I lost some weight, but it was all in drool. I just paid my property taxes. The poll tax is my favorite tax.” 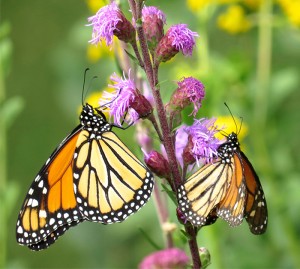 Photo of monarch butterflies on a blazing star by Al Batt.

“The poll tax was repealed,” I say.

“I know, that’s what I like about it. I stopped at the veterinarian’s office to pay my bill. It seemed too high, but I didn’t want to argue. You know what happens to aggressive males in that office. Say, do you still have that chainsaw I loaned you?”

“Still Bill is like a lava lamp. Fun to watch, but not that bright. No, I don’t need it. It’s just that the guy I borrowed it from says that the fellow he borrowed it from had rented it from St. Menard’s Hardware and is having to pay late charges.”

A window unto nature

A poor life this is if we do not spend time gazing through glass. I didn’t see them, but I heard crickets singing as if they were searching for Buddy Holly outside my window.

“Do you keep a list of the birds you see?” Sort of. My problem with lists is that I like seeing birds more than I like keeping records. Some people keep a life list, a North American list, a state list, a county list, a yard list, the birds they see on Jan. 1 list, a list of birds seen on a birthday, etc. I do many bird surveys and countless bird counts. I report birds seen to the Minnesota Ornithologists’ Union and other organizations. So I keep records. Every year at the Minnesota State Fair, there is a raptor guy from Texas. He does a couple of shows each day. This year, what he called a bay-winged hawk, more commonly known as a Harris’s hawk, escaped and flew into a tree. It took him awhile to recapture the hawk. This happens, I think, every year with this man and one of his birds. It always seems to be a Harris’s hawk that escapes. I recall, while I was working at the fair with 200,000 of my closest personal friends, seeing this species of hawk flying overhead. I added it to my fair list of birds.

“Something killed several of my chickens but ate only the heads. What could it be?” A likely culprit would be the great horned owl. The owl usually eats only the head and neck. Feathers found on a fencepost near the chickens provide a clue. Dead chickens show signs of attack on the sides of the head if a mink or weasel had been the perpetrator. These predators often kill several birds and pile them together. The back of the head and neck are frequently the only parts consumed. A mink or weasel frequently leave a musky, skunk-like odor. If a predator eats the head and the breast meat of the dead birds, a raccoon is probably responsible. A skunk prefers to eat the soft insides, sometimes removing the head to drink blood. The opossum generally attacks one bird per visit. Usually, it eats the chicken’s abdomen.

Bob Krenik of Madison Lake asked why he doesn’t see gray foxes. They are shy and primarily nocturnal. The best time to catch a glimpse of one is dawn or dusk. A gray fox can be mistaken for red fox, as they have some red in their coat, but gray is dominant. They lack the black socks of red fox and have a black tail tip rather than a white one. The gray fox climbs trees with apparent ease.

The kookaburra, famous for calling in old Tarzan movies, is a member of the kingfisher family and is found in Australia. It’s sometimes called the “bushman’s clock” because of its habit of calling in the morning and evening. Its call sounds like loud, raucous laughter. Does the laughing kookaburra really laugh? In an old children’s song, the kookaburra sits in a gum tree, eats gumdrops and laughs. The call starts out as a chuckle, turns into a belly laugh and becomes shrieking laughter.

Most white-tailed deer mate in their second year, though females occasionally mate as young as seven months. Mating occurs between October and December and females are pregnant for 6 and 1/2 months.

Join Audubon for a tour of Oxbow Park/Zollman Zoo in Byron on Sept. 28. Call 373-5080 for information. The park got its name because the Zumbro River nearly bent onto itself, forming a near circle that reminded early settlers of an oxen harness or oxbow. The zoo showcases more than 30 species of native animals.

“If one could conclude as to the nature of the Creator from a study of creation it would appear that God has an inordinate fondness for stars and beetles.” ― J.B.S. Haldane

“A person without a sense of humor is like a wagon without springs – jolted by every pebble in the road.” – Henry Ward Beecher