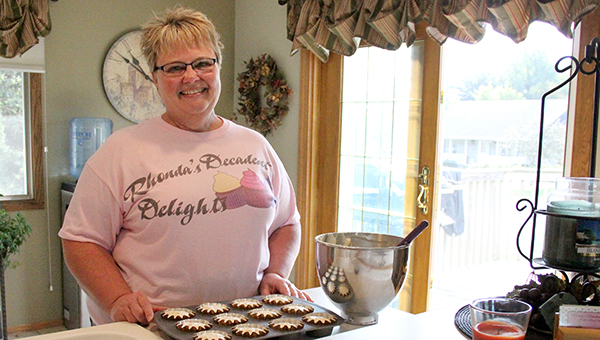 Rhonda Frisk of Lake Mills started Rhonda’s Decadent Delights in July out of her home. She specializes in decorated cakes and cupcakes. –Sarah Stultz/Albert Lea Tribune

LAKE MILLS — After working at the Cummins Filtration plant for 39 years, a Lake Mills woman is using her love and talent for baking to start her own business.

Rhonda Frisk, who worked in assembly and as shipping coordinator, in July was laid off with about 50 other employees. The company announced in 2009 it would be transferring all filter assembly operations to its facility in San Luis, Potosi, Mexico. About 80 employees remain, she said. 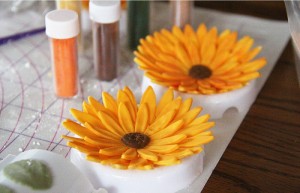 Fondant flowers made by Rhonda Frisk sit on her table at her home last week. The flowers were made to decorate a wedding cake.

“When the announcement came that they were moving, it was such a shock,” Frisk said. “You’ve given your whole life to the place, and then all the sudden you don’t have a job.”

But instead of becoming frustrated, this summer she took a leap forward by starting Rhonda’s Decadent Delights out of her home.

Frisk said it was a fluke that her business started and has grown like it has.

She said it began when she made salted caramel cupcakes once and took them to her son and his wife who were camping. They told her she should sell them.

Around the same time, she made a comment while still at Cummins that she liked to bake, and people started asking her to make them cupcakes and cakes.

“I have been solidly booked ever since then,” she said. “It’s been a godsend to me, being 60 years old and working at a factory for more than 30 years.” 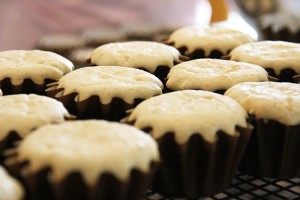 Cupcakes made by Rhonda Frisk sit on a cooling rack last week in her home.

She got a kick-start for her business by selling cupcakes at the Lake Mills Farmers Market, and then she started getting more and more outside orders.

Now she has customers not only in Lake Mills but also throughout northern Iowa and southern Minnesota.

“Never, ever did I ever think this would happen,” she said. “It’s almost like a dream.”

Some of the kinds of cupcakes she makes are brown butter pumpkin, carrot cake, coconut cream, peanut butter cup, chocolate buttercream, Snickers and Samoa, among others. She is constantly perfecting new recipes and looking for more.

Frisk said she learned how to bake from her mother and grandmother and uses many family recipes and other recipes she finds online that she tweaks to her liking.

“Everything that we had when we were growing up was homemade,” she said.

She has taken Wilton cake decorating classes at Hobby Lobby in Mason City and takes pride in making her work look special.

“There’s so much satisfaction when people thank me for my work,” Frisk said. “I don’t ever want to quit.”

Though she has contemplated moving into a storefront in downtown Lake Mills to expand her business, for now she plans to stay put and bake out of her home.

It can also be found on Facebook, where Frisk posts pictures of some of the cakes and cupcakes she makes.