First sign of a junco could mean winter is a comin’

“Everything is nearly copacetic. My garden was so good, I might win the Nobel Peas Prize. I cleaned my car’s windshield a little. I don’t like to clean it too much. If I do, it leaves room for new bugs to splatter themselves on the glass. I’ve been keeping busy putting up ‘Have you seen this sock?’ posters in laundromats. I’m not complaining, but nice weather makes me nervous. I know cold, nasty winter weather is just around the corner and it won’t be long before I’ll need to see the doctor just to see how deep the frost line has gone into my body. I’ll go on winter hours. I sleep later after harvest. I become part pitchfork and spend much time in the hay. I probably eat too much and exercise too little. I like my grape nuts deep-fried, and I think the refrigerator looks good next to the sofa. If I can eat a sandwich without having to lean over the sink, I didn’t make it right. A young one in my family, she’s a nurse, keeps telling me that getting enough exercise and sleep is just as important as watching food intake. I think sleep is the most important factor. The only time I’m not eating is when I’m sleeping.” 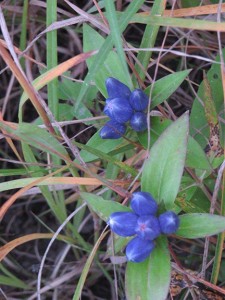 Photo of a bottled gentian by Al Batt.

On the road, naturally

Audubon members toured Oxbow Park and Zollman Zoo near Byron. It’s a busy place, with more than 300,000 visitors in 2011. We walked the prairie looking at grasses and forbs. As a boy, I read Willa Cather’s books. She wrote about the red grasses of Nebraska. I couldn’t wait to get to Nebraska to see those red grasses. When I did, I discovered that they were the same big bluestem that we have in Minnesota. I adore walking through prairies. In her “Afternoon on a Hill,” Edna St. Vincent Millay wrote, “I will be the gladdest thing under the sun! I will touch a hundred flowers and not pick one.”

I found a favorite, bottled gentian, a lovely blue flower. I grew up baling prairie for hay. It was called wild hay. An old saying went, “Farm the best, leave the rest.” The prairie was the best. It raised corn too well and because of that, most prairies disappeared. The wind sings in grass as well as in trees.

Rod and Ruth Searle of Waseca said they saw their first junco on Oct. 7. They added, “Winter is a comin’!” My father marked the calendar on the first day he saw a snowbird (dark-eyed junco) and believed the first trackable snow would fall six weeks later. This forecast applies to only the yard in which the junco was seen.

Brad Nelson of Albert Lea asked about the development of great horned owls. The incubation period is 30 to 37 days and the nestling period about 42 days. Nesting begins as early as January. Nestlings are unable to fly for 10 to 12 weeks, but they begin venturing onto nearby branches after about six weeks. Fledglings remain dependent on their parents for food until fall. Floyd Christensen of Albert Lea asked what animals eat acorns. Mammals include chipmunks, deer, foxes, flying squirrels, mice, opossums, rabbits, raccoons, squirrels and voles. Acorns are a black bear’s primary food source in many areas. Birds such as cardinals, chickadees, crows, grackles, jays, quail, red-headed woodpeckers, ruffed grouse, wild turkeys and wood ducks consume acorns, particularly from white oaks, which produce less bitter acorns than other oak trees.

“When I was a child, there was something called a picnic bee. What was it?” It was another name for the yellow jacket, an insect that attends many picnics. This wasp is hunting food, especially sweets in the late summer and fall.

Neal Batt of Hartland called, “I found giant white grubs in a tree. What are they?” It sounds like the larvae of stag beetles. Stag beetles resemble June bugs, but have more prominent heads. The mandibles are large and conspicuous, especially those of males. Stag beetle larvae feed in dead or decaying wood, such as logs and stumps. Stag beetles are harmless to people and property.

“How may deer have triplets?” Young white-tailed deer does typically have single fawns. Older does have 67 percent twins and 10 to 12 percent triplets. That means 100 older does could produce 191 fawns each year. Multiple birth numbers are dependent upon a healthy population due to proper habitat and nutrition.

“Do deer whistles on cars work?” No. Studies have shown that deer hear sounds the tires make better than the whistles.

Bernie Sonnek of Minnesota Lake wrote, “When monarch butterflies lay their eggs, how many will hatch to become an adult?” Studies have found that from 1 to 4 percent of eggs become adults. Roughly 1 in 100 monarchs tagged by Monarch Watch in eastern North America is recovered in Mexico.

“What’s the simplest thing I could do to keep birds from hitting the windows of my house?” Put screens on the windows.

“A bird in the hand is worth two in the bush.” — Miguel de Cervantes in “Don Quixote.”

“A bird in the bush is worth two in the hand.” — Motto adopted by Bird-Lore magazine.