Nature gently buries itself in the heart of watchers

“Everything is nearly copacetic. With the price of corn, things are going to be as tight as last winter’s long johns. The minister gave his usual Sunday morning sermon, but it was considerably longer than normal. I wanted to say something, but you know me. I tend to suffer in silence. Later, at the door, as he was shaking hands with the parishioners as they, I said, ‘Your sermon, pastor, was simply wonderful — so invigorating and inspiring and refreshing. Why I felt like a new man when I woke up.’” 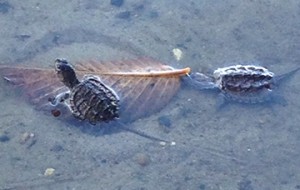 “You are the best of us,” I said, with more than a bit of sarcasm dripping from my words.

“Oh, don’t get your knickers in a twist. I made up for that by fixing his car.”

“What was wrong with the minister’s vehicle?” I ask.

“His heap was making some odd sounds. The kind of noises that stop whenever a mechanic is around. I made the racket stop.”

“I thought I saw a pig flying. How did you do that, Mr. Goodwrench?” I ask.

“I’m a handy fellow, equally proficient with hammer and wrench. Remember when I changed my recliner from left hand-drive to right hand-drive? Genius is least understood by those closest to it. I turned up the volume on his car’s radio.”

A river of blackbirds flowed overhead. Fall was in the air. I was happy that autumn shared its precious gift with me.

One of the nice things about Minnesota is that by the time you grow weary of a season, it has changed.

There was much chattering among the countless blackbirds, meaning that they were socializing.

A kind reader sent me this written by The Bard of Sherman Avenue, “No class in math like you or I, yet see how well they multiply.”

A sumptuous combination of beauty and imagination, nature buries itself in the heart of a watcher.

Dr. Leonid and Kathleen Skorin of Albert Lea kindly invited my wife and me to their home for a snapping turtle release. Forty-one tiny turtles that had been rescued from storm drains were released into Lake Chapeau by neighborhood children. Young snappers are about an inch long with soft shells at hatching and must make it to water without being preyed upon by raccoons, skunks, foxes, dogs, birds and snakes. In water, fish may take the young turtles. The turtles overwinter in shallow water, sitting on the bottom, digging into mud, or sheltered under debris, absorbing oxygen into their skin. The common snapping turtle is Minnesota’s largest turtle. The upper shell (carapace) of an adult averages 8 to 14 inches in length and its weight ranges from 10 to 35 pounds. The carapace is green to brown to black in color and is often covered in moss.

Jack Brush of New Ulm told me that he was fishing near 200 gulls when the gulls suddenly took to the air. A bald eagle flew by. I’ve watched bald eagles for many years and I’ve seen an eagle kill only one gull. The eagle didn’t eat it. It was a battle over a salmon. The eagle grew weary of being tormented by gulls and flew into a tree. It preened for a bit before flying down and dispatching a gull. I’ve seen eagles threaten gulls, and I’ve watched them steal food from gulls, typically carrion. Gulls, in turn, harass eagles on kill. Fish are the main entrée for bald eagles, but they eat a variety of foods. The gulls were being on the safe side.

Golfing with a hummingbird

Shaun Olson of Wells teed off on the golf course when a hummingbird landed on the John Deere hat he was wearing. Shaun swung, the hummingbird flew from the hat, and Shaun’s drive was long, straight and true. Perhaps those who are hoping to improve their golf games would be well served by encouraging hummingbirds to land on their heads.

“I have scads of female cardinals in my yard. Why so many?” Both males and females have thick, bright orange, cone-shaped beaks. Males are bright red all over except for a black mask on their faces. The mask covers the eyes, goes around the beak and covers the throat so that it resembles a black bib. Females are light brown with a reddish crest, wings and tails. Females have a small, black mask and bib. Males are slightly larger than females. Young cardinals look similar to females, but have a gray-black bill and less red coloration. You could be seeing young cardinals.

“Why do all the mallards look like hens this time of year?” They are in eclipse plumage. It replaces the breeding plumage after the breeding season and appears at a time when the main flight feathers are molting. Molting is a process where feathers are replaced. This improves flight performance and waterproofing. Eclipse plumage tends to be duller than normal plumage, which makes sense if you’re a duck without proper flight feathers and want to hide from predators. It is a short-lived phase. The male mallard’s bill is a rich yellow. The female’s bill is a dirty orange color.

The bar-tailed godwit, a plump shorebird, flies as far as 7,242 miles without stopping on its annual fall migration from Alaska to New Zealand.

In a promotion for McCormick spices, Baltimore Bill, a crab, was sent down a plank into Chesapeake Bay. If he scuttles the pier’s right flank, an early winter is ahead; a path to the left indicates a warm fall. Baltimore Bill, in a reversal from a year ago, headed left.

“If people sat outside and looked at the stars each night, I’ll bet they’d live a lot differently.” — Calvin of the “Calvin and Hobbes” comic strip

“Make a habit of two things: to help, or at least to do no harm.” — Hippocrates