Tigers run out of time 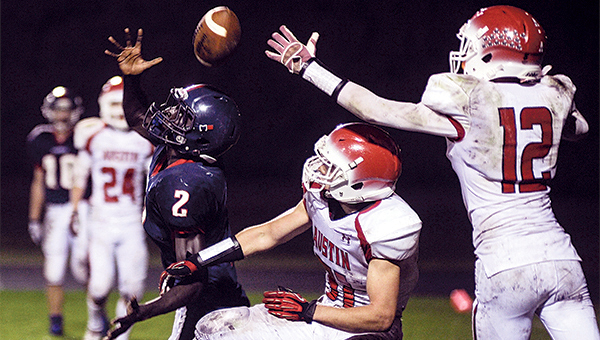 Albert Lea’s Bany Chan can’t quite pull in a pass on a two-point conversion in the fourth quarter against Austin Friday night in Albert Lea. — Eric Johnson/Albert Lea Tribune

The Albert Lea football team stayed strong in the face of adversity Friday night, but its late rally wasn’t enough in a 37-25 home loss to Austin.

The Tigers (0-7 overall, 0-7 Big Nine) poured in 18 points over the last nine minutes of the game after they trailed 37-7, but they simply ran out of time. 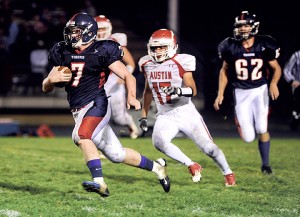 “They were really good in the first half, and we weren’t as good as we needed to be. It was a tale of two halves,” Albert Lea head coach Max Jeffrey said. “Our guys compete hard, and that’s what I love about our team. Austin made some big plays, and they’ve got a great running back. Coach (Brett) Vesel’s got it going. Their kids are lifting weights and they’re buying into what they’re doing.”

Albert Lea’s Triston Westerlund led the attack as he ran for 105 yards and a pair of touchdowns. He also threw for 148 yards and two touchdowns. Westerlund hit Jakob Kilby on a 47-yard scoring strike with 20 seconds left in the first half to make it 28-7 at the break. 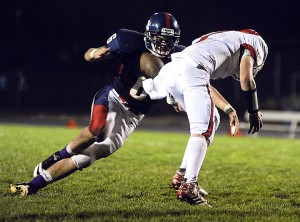 Albert Lea kept Austin’s offense out of the end zone in the third quarter, but the Packers (3-4 overall, 3-4 Big Nine) took momentum back when the Tigers snapped the ball out of the end zone for a safety with 2 minutes and 17 seconds left in the half.

The Tigers forced two Austin turnovers in the second half as Tim Christianson picked off a pass and Albert Lea recovered an onside kick. The Tigers also converted two fake punts, but neither of them led to a score.

“I’m proud of our guys, and we made some plays in the second half,” Jeffrey said.

Albert Lea was missing a few players in its loss to Owatonna last Friday, but those players were back in action Friday. Jeffrey credited the toughness of his team as tight end Cody Scherff played with a fractured ankle against the Packers. 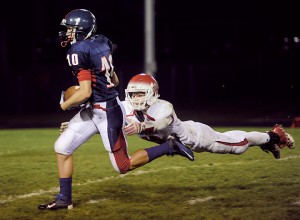 “Our guys that are back in were medically hurt. Cody Sherff played with a fractured ankle tonight, Hunter Hoyne had a bruised kidney and our running back Bany Chan, he’s had a bruised shoulder the whole season,” Jeffrey said. “We aren’t holding guys out on purpose. We don’t do that. We’ve got courage and we’ve got guys who are willing to go out and play, even when they’re injured.”

Kilby, an Albert Lea sophomore, finished the night with 123 yards and a TD.

In the section 1AAAA standings, Albert Lea is in fifth place out of six teams. Kasson-Mantorville and Stewartville are the top teams in the section with identical records of 6-1.