Fall is a lovely time when the world turns into gold

“Everything is nearly copacetic. Things are so good that I’m considering hiring somebody to help me enjoy them. The only fly in the ointment is that I bought one of those foam-fitting mattresses that has a memory. My back is sore and the foam memory remembers how to keep it that way. Remember back when you were young and repulsive, and everyone had a tire swing? A tire hanging by a rope from a tree, made into a swing. My uncle Ed had an entire car hanging from an oak tree. He said it was for the comfort of the passengers. Ed worked for the HAHA — the Hartland-Alden-Hayward-Austin Railroad. Ed started walking five miles a day when he was 65. He’s 91 now, and we have no idea where he is. Even though he likely left a trail of cholesterol. He never was much for physical fitness. To him, eating a potato chip one at a time was exercise. Ed started walking to lose weight. He believed in a fat tax. He thought everyone should pay $10 per pound in taxes. Say, did you go to the party at the Eastvolds?”

“They were probably afraid you’d attend,” I reply.

It was a Midas day. Everything had turned to gold. Fall is a lovely time. I walked, hoping to stumble upon something amazing. I find it impossible to keep from stumbling upon something amazing while walking. Arthur Rubinstein said, “To be alive, to be able to see, to walk, it’s all a miracle.”

A cloud of blackbirds headed to a destination known only to them. Red-winged blackbirds, grackles and cowbirds. They are common birds, but uncommonly beautiful. 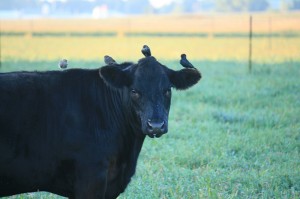 Bryce Gaudian of Hayward took this photo of cowbirds and their cow.

Big bluestem grew on the roadside. It’s a dominant grass species of the tallgrass prairie. It’s drought tolerant, responds favorably to grazing and can be maintained cheaply with the use of fire instead of fertilizer. It’s a warm-season grass that is very nutritious and supported bison herds. It provides erosion control and you can make hay. It’s a tall plant growing 4 to 10 feet tall with roots going 10 feet down. It’s often called turkey’s foot because of the three-part flower clusters that resemble the feet of a turkey.

Birds that live in the imagination

I taught a class of fourth graders. Tona of Minneapolis asked if there was a bird that carried its nest with it, incubating the eggs in flight during migration. Thereby getting a jump on all the other birds. It’s a great idea. It’s a wonder no bird has done it.

Once upon a time, it was my great fortune to work with Don Martin, a cartoonist famed for his work in MAD Magazine. I recall his drawing and description of the yellow-tailed groot hawk. “The female yellow-tailed groot hawk is very finicky, refusing to eat anything except the striped groot, a fish found only in the Pacific Ocean. This creates difficulties as groot hawks make their nests in the mountains of Colorado. Nonetheless, the male flies out for food twice a month, each round-trip taking 14 days. Unfortunately, he reaches the ocean in such an exhausted, dazed condition that he often brings back the wrong fish. This infuriates the female, who immediately sends him back to the Pacific. Very few groot hawks have lasting relationships.”

Tom Jessen of Madelia asked how the merlin got its name. In medieval falconry, a merlin was a female bird. The male was a jack. Because of its small size, this falcon was considered the right hunting bird for female falconers. The name “merlin” comes from the French word “esmerillon,” which has the same root as “merle,” another name for the European blackbird. Perhaps merlins were once used to hunt blackbirds. Merlins are sometimes called pigeon hawks.

Karen Wright of Mankato asked where yellowjackets go in winter. Yellowjackets have an annual nest. The old queen and the workers die when the temperature moves below freezing. Nest aren’t reused. The only survivors are newly-mated queens that had left the nest. They overwinter in sheltered sites and start their own nests next spring.

Delbert Karsjens of Clarks Grove asked if there are more red-tailed hawks this year. Probably the most common hawk in North America, it uses its broad wings to soar in lazy circles. It’s adept at perching atop utility poles while hunting. Red-tailed hawks nest from February to June. The female lays one to four eggs, which take 28 to 35 days to hatch. The young fledge in six or seven weeks. Great-horned owls and crows may raid nests. When rodent populations are high, redtails thrive. I don’t know if there are more redtails, but their numbers are good.

Jim Johnson of Hartland spotted bluebirds at the end of October and worried about the lack of insects for them to eat. In fall and winter, bluebirds eat fruit including sumac, blueberries, black cherry, currants, holly, dogwood, hackberries, honeysuckle, bayberries, juniper and poison ivy berries.

Toni Perschbacher of Albert Lea asked why all robins don’t migrate. She also asked what overwintering robins eat and what she could feed them. The vast majority of robins do move south in the winter. Robins migrate more in response to food than to temperature. The robin’s winter food is fruit — including chokecherries, crabapples, hawthorn, dogwood, mountain ash, sumac and juniper berries. In spring, they switch to earthworms and insects. Robins are winter wanderers. They need more food in cold weather and as more fruit is eaten, they move in response to diminishing food supplies. They aren’t true feeder birds, but could be fed mealworms and fresh or frozen fruit — chopped apple slices, raisins, blueberries, grapes, strawberries, raspberries or cherries placed in a platform feeder on the ground. Robins occasionally feed on suet, but not on birdseed.

“The idea of wilderness needs no defense, it only needs defenders.” — Edward Abbey