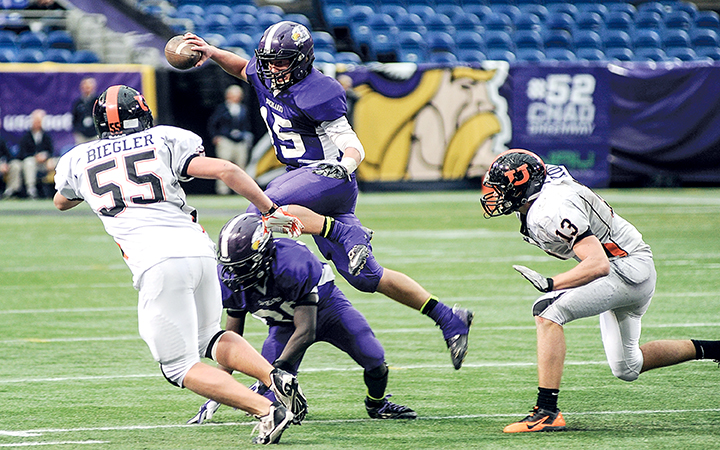 MINNEAPOLIS — The Grand Meadow football team knew it had to contain Underwood’s power rushing attack to have a chance at state title in the 9-Man Prep Bowl in the Metrodome Friday. The Superlarks exceeded even their own expectations as they shut down Underwood in a 28-6 win to capture Grand Meadow’s first state football title in school history.

The Superlarks (13-1 overall) held the Rockets (10-4 overall) to just 2.8 yards per carry and held the state’s leading rusher Noah Thompson to just 35 yards in the win.

“He was coming into this game with like 2,400 yards. That’s a great accomplishment, and he’s an amazing player. But I don’t think he liked it when we were so physical with him,” Grand Meadow senior lineman Isaac Tangen said. “We redeemed ourselves. It feels amazing.”

The Larks lost the state title game last season, but this time it was Grand Meadow that was making all of the big plays as it took an early lead and never let go.

Bleifus’ throw sailed just over the hand of

Underwood’s safety as Olson pulled it in for the score.

“It was barely tipped, but it was a perfect ball and it was impossible to drop it,” Olson, who also had an interception in the win, said. “It was a big game changer, because we knew we could break one eventually.”

Grand Meadow doesn’t call a lot of trick plays, but head coach Gary Sloan knew the time was right to take a shot. The Larks had three of their first half drives end inside Underwood’s 40-yard line, and they weren’t satisfied with a one score lead.

“The flea flicker was huge,” Sloan said. “The fumble gave us an opportunity, and I decided to take a shot. That’s the first time we’ve ever run that play, and we put it in at the beginning of the season. I told them to make it work and they made it work.”

As he has throughout the entire season Grand Meadow junior running back Landon Jacobson kept the ball moving as he ran for 123 yards and a touchdown.

“We’ve worked all year for this,” Jacobson said. “We’re all excited.”

Bleifus made his last game count for the Larks as he threw for 111 yards and ran for 83 yards, while also racking up 10 tackles. Bleifus made the highlight of the day in the fourth quarter when he shed about four tackles in the backfield and he shook off another defender on his way downfield on what became a 33-yard touchdown run to put the Larks up 28-0 with 8:49 left in the game.

“I thought I was down, but I figured it’s my senior year and my last game with just a few minutes left,” Bleifus said. “I had to give it my all and I kept my feet running. Sloan told us to stay inbounds, but I didn’t care. I was going for the end zone.”

After losing the state title game last season, Grand Meadow wanted to get back to the big game this year. But there was no guarantee the team could do that as it team graduated 10 seniors and had just three seniors this season.

“It hasn’t really sunk in yet,” Sloan said. “I’m so proud of those guys. We showed that you don’t have to have a ton of upperclassmen. You’ve got to work hard and get better every day and we’ve improved so much from the beginning of the season.”