“Everything is nearly copacetic. I’ve been looking at the calendar. It goes in one year and out the other. Winter will be here before long. No one knows what it will be like. A weather forecaster’s thinking is clouded even if he has more degrees than a winter day. The other day, they predicted freezing rain. They got it right. It was an ice day.” 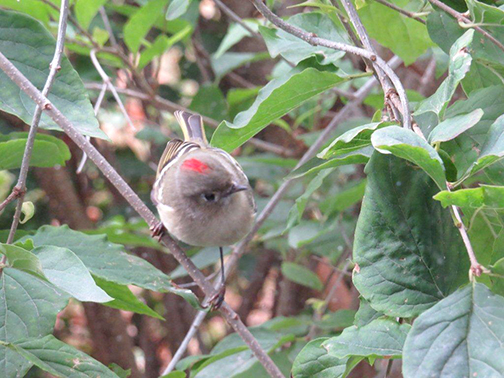 “Even a blind hog finds the occasional acorn,” I add.

“Thanks, Confucius. Speaking of the weatherman, his brain has muscles that have never been used. Foggy locked his keys in the car. It took him two hours to get his brother, Doughnut, out of the car.”

“Why is he called Doughnut?” I ask.

“Because he’s crazy about money. Doughnut wears shoes to bed now. He’s trying to stop biting his nails. He’s a good artist, but he never signs his name at the bottom of a painting, because he doesn’t want to paint himself into a corner. I went to see Doughnut about a winter job. He asked what my greatest weakness was.”

An angelic form flew overhead and landed in a tree.

A single crow perched on a branch. Was it an attempted murder?

Earlier, I’d heard The Byrds singing on the radio, “To every thing there is a season, and a time to every purpose under the heaven: A time to be born, and a time to die; a time to plant, a time to reap that which is planted.” A beautiful song borrowed heavily from Pete Seeger who borrowed a great extent from the Bible.

Each season brings welcomed wonderment. One question brings another.

The big black bird lingered beyond my understanding. I listened to the crow making odd sounds. I had no idea what was meant by its calls.

Alice in Wonderland said, “Curiouser and curiouser!” She meant that things were getting stranger. I’m curiouser and curiouser, with a different meaning. I’m becoming more and more curious about the world around me. I live curiously. I’m eager to learn more. I want to know what a lone crow is saying.

My wife was volunteering at the American Bald Eagle Foundation in Haines, Alaska. She was working with Dylan, an eastern screech owl. Dylan, although fierce in his own right, is tiny and cute. Dylan appeared to be yawning. He wasn’t. What Dylan was doing was coughing up a pellet. After an owl eats prey items such as small rodents, birds and bugs, it cannot digest all the fur, bones, teeth, feathers and insect shells. These parts are formed into a pellet and spit out. If you dissect an owl pellet, you’ll find what has been on the raptor’s menu.

I watched a gray squirrel pick up an acorn. It moved to a place it thought to be acceptable for storage. It dug a hole in the ground to fit the nut. It stopped its endeavors several times to look around, searching for other squirrels that might pirate the acorn. Seeing none, it placed the acorn in the hole, covered it with dirt and padded it shut with its paws. It took another peek for spying squirrels before leaving the scene. Someone was watching. It wasn’t a squirrel, but it was another eater of acorns. A blue jay flew in, pecked the acorn free and flew away with the acorn in its bill.

The rough-legged hawk breeds in the Arctic tundra and taiga regions. In the fall, rough-legged hawks leave their breeding grounds and migrate to wintering sites in southern Canada and northern United States. As a boy, I called them “Christmas hawks.” They typically select open habitats similar to those of their breeding grounds. Expansive agricultural lands where food is plentiful makes a perfect place.

The name, rough-legged, refers to the hawk’s feathered legs. The ferruginous hawk and the golden eagle also have legs feathered all the way to the toes.

Each of America’s deer eats about 3,000 pounds of vegetation per year. A white-tailed deer can run up to 40 miles per hour. They will eat anything from soybeans to ladybugs.

Andrew Manske, a wildlife filmmaker from Grand Prairie, Alberta, wanted to film a wolverine in high definition. He set up a plywood blind in northern Alberta, where the winter temperature can hit 40 below. In 2011, Manske spent 28 straight days in the blind. There could be no fire and no urination outside (he stored his urine in sealed bottles) as these things might spook the elusive wolverine. He saw one wolverine, but it was after dark and resulted in a grainy video. He tried again in 2012 with no luck. It’s not easy to see one of the animals. A wolverine could have a range of as much as 195 square miles. In 2013, he spent 25 days in a blind and was able to get usable footage of a wolverine.

This from Amy Stewart’s “Wicked Bugs,” “The bullet ant gets its name from the fact that its bite feels like a gunshot. Those who have had the misfortune of getting bitten by this inch-long South American ant say that the pain is overpowering for several hours, then subsides over the next few days. Some people are temporarily unable to use the limb that’s been stung, and some report nausea, sweating and shaking after the attack.”

“I want to hang a map of the world in my house. Then I’m going to put pins into all the locations that I’ve traveled to. But first, I’m going to have to travel to the top two corners of the map so it won’t fall down.” — Mitch Hedberg

“God writes the Gospel not in the Bible alone, but also on trees and in the flowers and clouds and stars.” — Martin Luther