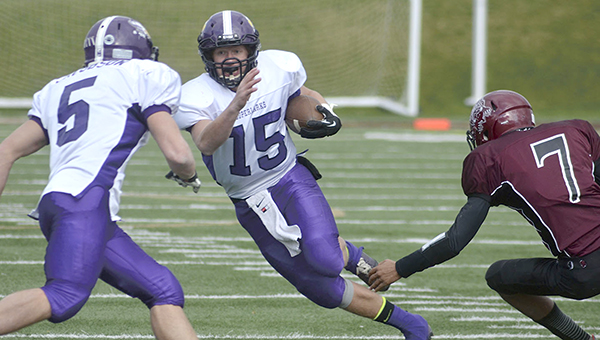 MARSHALL — The Superlarks didn’t feel like underdogs when they traveled to Marshall to play undefeated and No. 1-ranked Mountain Lake Area in the 9-Man state football quarterfinals Saturday.

The Larks also didn’t look like underdogs as they threw the kitchen sink at the Wolverines and walked away with a 35-18 win that sends the Larks to the state quarterfinals for the second straight season. 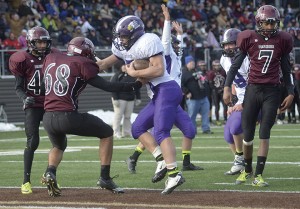 The Larks (11-1 overall) had all the motivation they needed before going into Saturday’s game, and then the Wolverines gave them a little more during the week.

“They said something in the paper over there and that really put a spark underneath us,” Grand Meadow offensive lineman Wyatt Richardson said. “We wanted to come out and smash it at them. They said they wanted us and they got us.”

Grand Meadow relied heavily on its run game in the second half as Landon Jacobson piled up 170 of his 202 yards of offense after halftime. Jacobson broke the game open early in the fourth quarter when he broke several tackles on a 66-yard touchdown run down the sideline to make it 32-18 with 11 minutes, 44 seconds left in the game.

Jacobson, who had 166 yards rushing and two touchdowns, also had a 30-yard punt return that set up a 2-yard touchdown run by Trenton Bleifus to put Grand Meadow up 19-12 early in the half.

“They came out strong in the first half, and I think they came into the game underestimating us. I knew they’d come to play in the second half,” Jacobson said. “I have no idea (what happened on the 66-yard run). I just knew we had to stay in bounds to keep the clock going.” 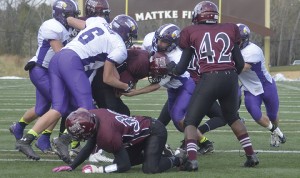 The Larks opened the game by running to set up the pass. Bleifus hit Blake Olson on fourth-and-6 for an 11-yard touchdown to make it 7-0, and Bleifus found Michael Stejskal on a 35-yard touchdown pass to make it 13-6 with 1 minute, 42 seconds left in the half.

“We got (our passing plays) at big times, and we got big plays out of them. I took some chances and it worked. We knew it was going to take everything in the playbook to win this one,” Grand Meadow head coach Gary Sloan said. “I knew we’d show up and I knew we’d play hard, but I never thought we could win by that kind of score. We had a great week of practice, and our coaches did a great job of coming up with a game plan.”

The Wolverines (11-1 overall) took the momentum right before half, when Demar Rodney took a screen pass and scored from 39-yards out with just seven seconds left in the half. But Grand Meadow took that momentum back early in the second half when a punt by Olson pinned Mountain Lake at its own 3-yard line, and that set up Jacobson’s big punt return.

“I think we wore them down pretty well,” Richardson said. “We just ran the football at them and I think it got to them a little a bit.” 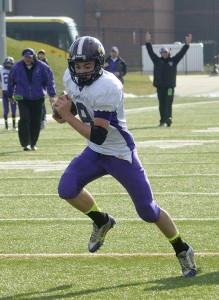 Grand Meadow’s Michael Stejskal breaks for a for a touchdown against Mountain Lake in Marshall Saturday. — Rocky Hulne/Albert Lea Tribune

Grand Meadow’s defense didn’t always make stops, but it did a great job of limiting Mountain Lake’s versatile offense. The Wolverines were stopped on fourth down three separate times, and they managed just 132 rushing yards on 30 carries. Of their 207 passing yards, 124 of those yards came on three plays.

Jacobson also had a big game on the defensive side of the ball as he led the Larks in tackles.

“Landon is an exceptional player,” Sloan said. “I told him at the beginning of the week that he didn’t need to have a good game, he had to have a great game. I think he listened to me.”

Jacobson had to catch his breath after the game, but he’s glad to know his season is still going.

“I won’t feel (sore) for awhile. I’ll probably feel it tomorrow,” Jacobson said. ” Right now, I’m just excited. We came into this game knowing they would throw a lot of stuff at us, and we’d have to control it. The most important game is the next one. We’ll keep playing hard.”

The Larks will play Kittson Centrall (11-0 overall) in the 9-Man state semifinals at the Metrodome in Minneapolis at 9 a.m. Friday. Kittson beat Ada-Borup 38-14 to get to the semifinals.