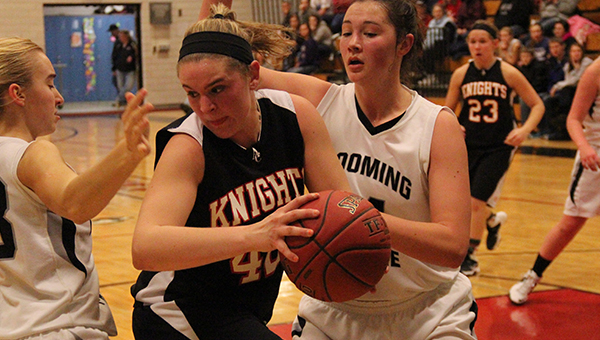 The first few minutes of the Alden-Conger girls’ basketball game against Blooming Prairie were not pretty.

The Knights fell behind the Blossoms 19-0, and despite a good effort on Tuesday at home, Alden-Conger couldn’t complete a comeback. Blooming Prairie won 76-50. 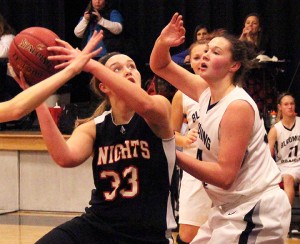 “We were getting the shots we wanted, they just weren’t going in the basket,” she said. “It’s tough to hang around with a good team like Blooming Prairie when you’re just not making shots.”

Despite the score, Hovendick said she was very encouraged with the way the girls battled throughout the game.

“We showed really good fight throughout the game. That was one of the things that we talked about before the game as one of our goals,” she said. “We wanted to come out and play with passion and heart, and we really did that. We played right with Blooming Prairie and even outplayed them at certain parts of the game, and that’s something we haven’t done in the past.”

The Knights were able to whittle the lead down to about eight points in the first half, but Blooming Prairie took a comfy 37-22 lead into halftime.

“We showed a lot of resiliency. A lot of teams would have thrown in the towel when they were down by that much to begin with,” Hovendick said. “We kept fighting, we started having shots fall, we started getting stops, and we made a ballgame of it.”

In the second half, Hovendick encouraged her players to continue taking shots when they were available.

“We’ve been trying to build their confidence,” she said. “I think we have a lot of really talented shooters, they just don’t always play that way on the court.”

The loss drops the Knights to 6-4 this season. Alden-Conger won two of the three games it played this week. The Knights will be back in action Jan. 3 when they travel to Granada-Huntley-East Chain.

“It’s about where we finish. It’s not about where we are right now,” Hovendick said. “And if we keep improving and keep fixing the mistakes that we’re making we’re going to be in a really good position at the end of the year.”