Bald eagles like to gather in Alaska to catch salmon

“Everything is nearly copacetic. I’m sitting up and taking nourishment. I’ve joined the Bite Off More Than I Can Chew Club. I made a list of things to do today. Things like building a paper airplane in a bottle and playing “In-A-Gadda-Da-Vida” with my hand and armpit. So far, all I’ve done is to make the list. That’s OK. At least I don’t have CDO.” 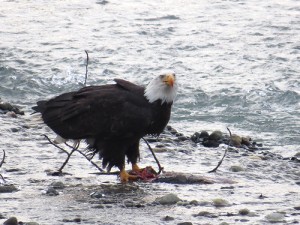 Photo of an eagle and its prey by Al Batt.

“It’s like OCD, but the letters are in alphabetical order – like they’re supposed to be. I can’t wait until Lake Inferior freezes. This year, I’m cutting strips in the ice so I can go trolling. I’ve put myself on every do-not-call list, but I still get calls from telemarketers. I don’t have time to talk to them. I have dirt to scratch and eggs to lay. I have “Gunsmoke” reruns to watch. I’m a problem solver. I get it from Pop’s side of the family. When I was a teenager, Pop kept the car’s steering wheel under his pillow to keep me from running with my hoodlum friends like you. I’ve discovered a surefire way to end telemarketer calls quickly.”

Alaska is all uphill from here.

Haines, Alaska, is famous for the winter gathering of bald eagles that come to feast on salmon in the Chilkat River.

Haines is a site for soar eyes. Everyone had eagle eyes. The Haines Highway parallels the Chilkat River, a portion of which has been set aside as a bald eagle preserve.

A man told me that when he dies, he’d like to be chopped up and tossed out with the salmon in the Chilkat River. “That way you would feed the bald eagles,” I say. He said that way his friends could gather, wave and say, “Goodbye, old chum.”

The salmon spawning runs into the Chilkat River come in this order — sockeye (red), king (chinook), pink (humpy), chum (dog) and coho (silver). There is overlapping, but the sockeye has the longest run. The preference of the palate varies, but sockeye and king are the favorites that people eat with coho next, followed by pink and chum. A simple way to remember them is that your thumb rhymes with chum. Your forefinger is something you might use to poke someone in the eye, sockeye. Your middle is your largest finger. The king is the largest salmon. Your ring finger might carry a silver ring, silver salmon. And your little or pinkie finger reminds you of the pink salmon.

Why do they call it a salmon run when the salmon can’t run? When do the smoked salmon run? I don’t know.

On an area called the Council Grounds, a confluence of three rivers (Klehini, Tsirku and Chilkat) creates an alluvial fan. Upwelling water keeps the water ice-free. This allows chum salmon to spawn late into the season. Chums spend two to four years in salt water before coming back to fresh water to spawn. They provide the primary food for the eagles. Human harvest of salmon is managed with subsistence fishing allowed.

It’s a place where the magic happens and not only brings amazement, but drags understanding with it.

I ate fish along with the eagles. I ingested eulachon (candlefish), known locally as hooligan. The small-smelt like fish are rich in oil and are rendered for that oil. This oil was such a valuable trade commodity that the original trails from Haines into the interior were known as grease trails.

Magpies labored over the river pulling their long tails in flight looking like Holstein pheasants. The American dipper, with its white eyelids and rotund gray body, dipped as it hunted the cold, moving water. Its dipping actions might help the bird see, confuse predators or is a method of communication in an environment where communication is difficult.

A woman asked a question about the eagles. I answered her before asking one in return.

She smiled and replied, “No, but I’m about to become one.”

Haines typically gets the first snowfall at Halloween and the first heavy snow at Thanksgiving. This Halloween, a brown bear went trick-or-treating in Haines. It broke into sheds and damaged vehicles. A homeowner fired bottle rockets at it. To a bear, there are two things in the world, bears and food for bears.

When God made Alaska, he was showing off. According to a report by the United States Bureau of Land Management, approximately 65 percent of Alaska is owned and managed by the U.S. federal government as national forests, parks and wildlife refuges. Of these, the Bureau of Land Management manages 23.8 percent of the state. The U.S. Fish and Wildlife Service manages the Arctic National Wildlife Refuge. The state of Alaska owns 24.5 percent and just under 10 percent is managed by Native corporations created under the Alaska Native Claims Settlement Act. Private interests own less than 1 percent.

A sobersided gentleman told me that he lived in the bush, far from any store. He said that he didn’t go shopping until he’d run out of many things.

Gas is expensive and there isn’t much fast driving. A Haines friend, Dave Olerud, has owned a van for 23 years. During that time he has put 68,000 miles on the vehicle.

Michael Marks of Haines drove me to the ferry terminal. One of the other passengers asked Michael how much it cost to put a car on the ferry.

“I don’t know,” answered Michael. “If I knew how much such things cost, I’d never leave Alaska.”

“I realized that if I had to choose, I would rather have birds than airplanes.” – Charles Lindbergh