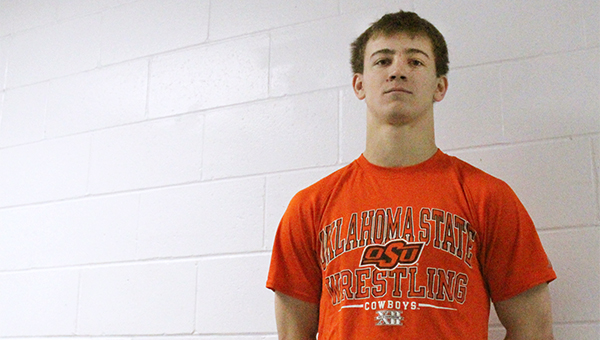 WELLS — When opponents take the mat to wrestle United South Central senior Dylan Herman, they can expect the match to end with the referee slamming his hand on the mat to signify a pin.

Those pins have gone in favor of Herman throughout his career. He shattered the school’s career falls record during the season’s first tournament this year. The previous record was 84 pins. Herman also eclipsed 150 victories this year. Last weekend, he captured the 145-pound title at the Redwood River Riot, a 29-team tournament in Redwood Falls.

“My eighth grade year, I got 20 falls, and that was like one of the top four in history for the school,” Herman said. “So then coach Marcus (Eytcheson) and I were talking about how I was on pace to shatter the record. Our team beat the school’s fall record three years in a row, so we just keep getting more and more falls and I caught up pretty quickly.”

Herman said the entire team looks for the pin when they take the mat.

“We’d rather get a pin than a technical fall,” he said. “A tech. may look more dominant, but we want the fall. It’s more team points, and we need the team points.”

Wrestling runs in the Herman family. Dylan’s little brother Derek wrestles at 152 pounds for the Rebels, and their older brother also wrestled when he was in high school.

“I started wrestling when I was three years old. My older brother would go to practice and my mom said that I would steal his shoes and start practicing,” Herman said. “Next thing you know, my little brother and I were wrestling at home.”

Dylan said Derek has been his practice partner since seventh grade, and he cheers hard during Derek’s matches.

“I sometimes get in trouble for coaching,” he said. “I’ve been warned to leave and go on the bus before because I yell too loud during his matches. I get a little into it.”

Herman finished third at the state tournament the past two seasons. He said he was not pleased with that finish. Eytcheson said Herman may have expected to take the title, which led to him falling. This season, his coach has seen an improved work ethic.

“Last year I was expecting a state title,” Herman said. “We all thought I was going to win it. Getting third was a major disappointment. There was no celebration. I couldn’t even watch the title match, it was not a positive thing at all.”

Herman said the loss made him realize how important working in the offseason was.

“Once wrestling starts in the winter I go all the way through spring,” he said. “We go to the national tournament in the summer and Fargo. I wrestled at the Virginia Beach Nationals right after the season. We stay pretty busy.”

Herman said he plans to wrestle next year in college, but he wasn’t going to make a decision until later in the season. Next, USC will be in action at 5 p.m. Jan. 2 at Blooming Prairie.