“Everything is nearly copacetic. I could use a day between Sunday and Monday. I had cake for breakfast. I figured it was somebody’s birthday somewhere. I found out that I need eyeglasses. Boy, I didn’t see that coming. I guess I should have. I haven’t been able to read the numbers on the bathroom scale for a few years. I put on my new glasses and stepped on the scale. I was surprised. Those glasses weighed 47 pounds! On the day I was fitted with the cheaters, I went shopping in one of those stores that’s bigger than a few barns. Shopping scares me to debt. I paid for my purchases and tried to leave the store. 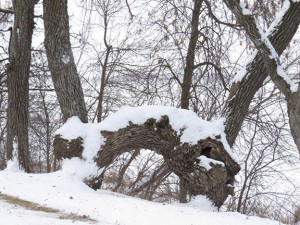 The security buzzer went off. I pretended that I was being electrocuted. The store gave me a free can of honey-roasted peanuts. I just talked to one of my uncles. He was wealthy at one time but lost all his money in a Ponzi scheme. He invested in a company that was supposed to be making walleye and perch calls. He told me that he is 97 years old, and he doesn’t have an enemy in the world.”

“Kind of. He’s outlived all of his enemies.”

Snowflakes can be birds

It was a day that some would claim unfit for man and beast. Windy and cold, white forms blew up from the road ahead. Some of the snowflakes had feathers. Snow buntings feed in our fields and on graveled roadsides. They breed in the Arctic tundra.

John Hurd of North Mankato found this in a July 1, 1905, newspaper that was in a wall cavity of an old house in lower North Mankato under a section entitled: “Friends in Fur and Feathers.” It was called, “A Bird with a Degree.” “The birds all met once on a tall maple tree, On the uppermost branch, to confer a degree. To one of their number this honor they gave because he was cheery and happy and brave. The degree was conferred by the president crow, All dressed in the neatest black, as you know. So now that proud member, which often you’ll see, Is known by the title of Chicka D.D.!”

John’s find reminds me of the thrill I get each time I see a chickadee. It causes me to fall in love with the world all over again.

Richard Anderson of Albert Lea wrote that he had heard that coots migrate at night. He said that was logical as they are on the lake one day and gone the next. Coots do migrate at night. Many birds do. Migration is an endurance test. At night the atmospheric structure is much more stable. It is cooler and smoother than during the day.

The coolness helps birds maintain healthy body temperatures without large water losses while the smoothness of the air allows for maintaining a course without expending energy correcting a course in turbulent air. As many predators are active during the day, migrating at night makes small birds less vulnerable to predation. It’s easier to find food during the day. Night migrators spend the daylight hours in a stopover patch with good food resources, packing on the calories to regain weight lost in overnight flight.

A thong tree rises from the ground, then the trunk bends horizontally before bending at a right angle and once again heading vertically. Legend has it that Native Americans bent over a sapling, using leather thongs (or a forked stick) to hold it in place, causing it to form in an atypical shape. A storm could cause such a thing. A big tree falling on a little tree without killing it. There are number of these trees around. If you look for them, you will find them.

They are great places to sit and eat lunch. Many of the trees I see are too young to have had any sincere dealings with Native Americans. It’s said that the strange trees were supposed to point to water, good hunting, hideouts or buried treasure. They likely do eventually. Others believe they’re used to mark trails. You can’t rule out such things. An odd-shaped tree needs a story. Others say that trail trees were used to cure hides. The idea that thong trees are manmade continues to be met with a great deal of skepticism.

Harlan Lutteke of Alden asks where blue jays sleep in winter. Small birds have higher metabolic rates than large ones because of the relationship of surface to volume. Heat dissipates from the surface of an object. That’s why northern animals are often larger-bodied than the same species living in warmer climates. A larger body typically means a lower surface area to volume ratio. Blue jays might head for the dense vegetation, such as a tangle of vines or evergreen shrubs. Evergreens offer good protection from wind and cold. They might sleep perched close to the trunk of trees. The trunk holds a bit of heat from the day and the birds would be alerted to any vibrations predators make while climbing the tree.

Craig Rayman Glenville asked about the pecking order at bird feeders. Pecking order is widely used to indicate status or rank of such diverse creatures from birds to humans. We don’t even have any beaks to peck with. The term derives from the observation of chickens which commonly form dominance hierarchies. Individual birds need other birds. More eyes and ears make it easier to detect predators. Still, the dominant bird wants to be the first to feed at the trough, have first choice of foods and be the first to get its fill.

“The world is full of obvious things, which nobody by chance ever observes.” — Arthur Conan Doyle

“Sometimes I need only stand wherever I am to be blessed.”— Mary Oliver