A winter diet for birds

Shall I compare you to a summer’s day? That wouldn’t be fair to either of you. You’re Old Man Winter.

To me, winter begins when the daily average temperatures fall below 32 degrees. We bundle up. Birds fluff their feathers for warmth. It can give a bird the appearance of a beer-bellied woodpecker.

Minnesota has stout winters. Snow fell as I walked. Not a bad thing, as snow often arrives sideways under the influence of wind. I know snow. I live in its ancestral home. We have beautiful white, winter beaches without having oceans. 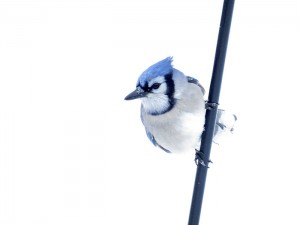 A blue jay of winter by Al Batt.

I look at small things for a long time. Every hair has a shadow. I watched a chickadee use a feeder. The diminutive package of feathers with a Type A personality was reason enough to have bird feeders.

Foods high in fat are critical to a bird’s winter diet. A small bird could lose up to 10 percent of its body weight during one cold night. Its fat reserves must be replenished. If they aren’t, protein scavenged from muscle tissue is depleted to maintain energy needs. Keeping bird feeders filled with high fat foods provides birds with the nutrition they need to survive. High on the list of foods to meet this need are suet, peanuts, sunflower chips or seeds and nyjer seed.

They lay eggs in abandoned nests of squirrels, hawks, eagles, great blue herons or crows, but sometimes nest on cliff ledges or in hollow trees.

The female incubates eggs for a month, even as winter rages about her. During that period the male brings her food. She can’t leave the nest for long or her eggs would freeze. The owlets leave the nest in six to nine weeks. Although the nestlings are unable to fly for 10 to 12 weeks, they venture onto nearby branches at about six weeks.

Why do great horned owls nest so early? Since they hunt at night, there’s maybe more to learning to locate and catch prey than there is for other raptors like hawks who hunt by sight in daylight.

Owls have extraordinarily well-developed senses, but young owls must develop hunting skills. It takes countless misses before an owl successfully uses its sharp talons to capture its first vole.

The owlets remain near their parents a long time compared to many other birds – through summer and into early fall.

During this time, young owls learn the skills they need to hunt on their own before the rigors of the next winter set in. By nesting early, owls can see food easier without leaves on the trees and with the benefit of the sharp contrast provided by snow.

It’s theorized that this early nesting allows owls to take advantage of a buffet of winter-weary wildlife. The arrival of the hungry owlets coincides with the first baby rabbits, muskrats and voles.

Bobbi Forster of Hollandale asked, “Do you have an app you recommend (for our new iPad) for bird identification and birdsong identification?”

Download the free bird apps from the app store. Think of them as trial apps. Try each of them out and see which one you like the best. Then buy that one. There is iBird, Peterson, Sibley, National Geographic and Audubon. All are good, but do vary both in content and cost.

Michael Bonner of Courtland wrote, “I saw a blue jay feeding on sunflower seeds at my bird table and I noticed him gobbling up food. My question is do they have a pouch? Is it thrown up later and pecked to crack the hull of the seed or is it partially digested then regurgitated?”

A blue jay has a gular pouch, a sac that is located beneath the bird’s tongue and extending down the throat to the upper portion of the esophagus.

The purpose of this pouch is storage. A blue jay can stash two or three acorns in this pouch, carry another in its mouth and a fifth in its bill. It could transport a much higher number of sunflower seeds.

The jay coughs them up later to eat in a more secure location or for caching.

Some call it a book

My book “A Life Gone to the Birds” is available at albatt.net. Thank you for reading.

“And as to me, I know nothing else but miracles.” – Walt Whitman

“He who marvels at the beauty of the world in the summer will find equal cause for wonder and admiration in winter.” – John Burroughs