Roost of house sparrows is full of chirps and squabbles

“Everything is nearly copacetic. I’m staying in shape. Unfortunately, this is the shape I stay in. I’ve been drinking one of those flavored coffees in the morning right after I brush my teeth. Mine is flavored with Crest toothpaste. Pop just had laser surgery on his eyes. Now he thinks he can make toast by staring at bread. He bought a new sofa for Christmas. It has a warning label saying that it may cause drowsiness. Chauncey and I carried it in for him. Chauncey has the time to help. His company went green and replaced him with a ficus. He whines so much about being unemployed that he sounds like screaming pigs in a metal building. Chauncey must be part pitchfork. He spends most of his life in the hay. I’d asked Santa for an ATM for Christmas. He brought me bills instead. I can’t believe it’s another year. Tomorrow always comes a day too soon. Before I know it, my future will be in my past. That would be a sad thing. I still have muscles in my head that I’ve never used. I’ve learned some things during the past year, but I’ve forgotten what they were. Been there, forgot that. Happy New Year. I’ll see you later if I don’t look out.” 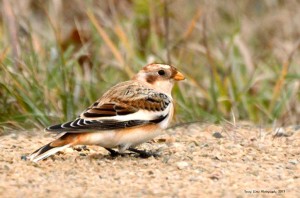 If a crow knocks at your door

I love a good mystery. Each day is one.

Lou Jean Ingham of Hayward worked at a bakery/bread outlet store until it closed. She told me that when she drove into the store each morning, a crow followed her car into the parking lot. The crow became extremely vocal and pecked at the front door of the establishment until Lou Jean tossed it a piece of stale bread. The crow grabbed the bread with its beak. If a pothole near the store held water, the crow dunked the bread in the water before eating it.

Curt Nemitz of Albert Lea asked why house sparrows are so noisy. During the day sparrows search for food. They aren’t fussy eaters and eat everything from insects to weed seeds to detritus from restaurants. You’d think the birds would be tired after a long day, but at sunset, they chirp as if they’d just gotten out of bed. Perhaps they don’t like settling down for the night. They are as I was when I was a small boy and my parents told me to go to bed. I came up with all sorts of excuses. I didn’t go quietly and neither do the house sparrows. When nightfall nears, house sparrows move to a pre-roosting site. The energetic birds fly from one bush or tree to the next, creating noise as they go. It’s thought that all the calling and flying about alerts other sparrows that it’s time to go to the roost. They act as if sleeping is the last thing on their agenda. Eventually, a small flock of sparrows gathers and heads to a communal roosting area. Even there they have difficulty calming down. The roost is filled with chirps and squabbling. Researchers believe that the sounds are a form of communication that helps the birds gain information from others. I suspect the fussing involves establishment of pecking order and perching preferences. On the coldest of winter days, it sounds as though house sparrows are holding a chirpathon.

“How and why do mourning dove wings whistle?” When mourning doves take flight, air vibrates the tips of their flight feathers, which cause whistling sounds. The rush of air creates wind instruments. However, it is the dove’s wings that move through the air rather than the air forced through an instrument. Many birds produce sounds when they fly. Wing sounds give the hummingbird its name. Owls have special feathers that silence their wings while hunting. A theory suggests that a dove’s wing whistle communicates danger. To test this theory, researchers recorded the wing whistles of doves during normal takeoff and during a panicked launch. When they played the normal takeoff sounds to a group of doves and other birds at a feeder, none of the birds paid much attention, but when they played sounds of panicked wing whistles, not only did the doves take flight, but the other birds did also. This showed that birds are able to detect subtle differences between normal and panicked dove wing whistles.

This from the DNR

At just over 20 acres, Clinton Falls Dwarf Trout Lily SNA (Scientific and Natural Area) is one of the smaller SNAs in Minnesota. What it lacks in size it makes up for in ideal habitat for a rare wildflower. Dwarf trout lilies naturally occur in only three counties in southeastern Minnesota, and nowhere else on earth and are therefore designated as federally endangered. This site contains one of the most significant populations of this Minnesota endemic, and unlike other sites, this population seems to be thriving.

The significance of this site has not gone unnoticed by DNR botanists. They have been documenting the extent of the dwarf trout lily population using GPS technology. The newly acquired information will be used to help design a monitoring protocol to track the status of this population over time. When it comes to the long-term conservation of dwarf trout lilies at the site it will take botanists, land managers and volunteers working in concert to preserve this wildflower.

The site benefits from the dedication of stewards Jerry and Karen Ibberson (from Ellendale). They have given presentations about the site to local groups, removed trash, surveyed the dwarf trout lilies and removed invasive dame’s rocket and buckthorn. Jerry took DNR chainsaw training to accelerate buckthorn removal.

“Always be on the lookout for the presence of wonder.” — E.B. White