“Everything is nearly copacetic. It’s hard to get Pop out of his recliner. Telling him to do something is like waving a blue flag in front of a bull. Nothing happens. He gets up too early. He likes his coffee. He hits the grounds running each morning. Pop can still do the same amount of pushups he could do in high school. None. His days, like all of ours, are numbered. His are not numbered correctly. The newest calendar he has hanging on the wall is from 2005. Pop still drives. He drives his old POD truck – Pile Of Dung. It’s as large as Rhode Island’s big brother. He uses his turn signals only when he changes lanes on purpose. The bumper sticker reads, ‘This truck has been in 11 accidents and hasn’t lost one yet.’ Ma puts all leftovers into a hotdish. She doesn’t believe in the separation of perch and steak. Pop still eats well. One day a week, he eats more than he should. He pushes an empty cart through several large supermarkets on their sample days. I like hanging around him. He teaches me so much. Just yesterday, he rolled out a pearl of wisdom.” 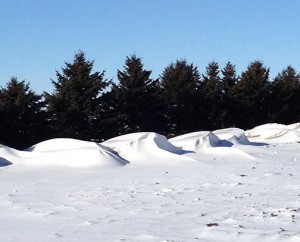 A photo of winter. “The color of springtime is in the flowers; the color of winter is in the imagination.” — Terri Guillemets. Photo by Gail Batt

“It’s bad manners to lie down inside someone else’s chalk body outline.”

Winter comes in many forms

An angry wind blew through the trees, creating a disquieting sound on a gelid morning.

Confucius taught, “Everything has beauty, but not everyone sees it.”

I looked longer. I saw it.

They reminded me how beautiful winter can be.

“Why were starlings brought to this country?” In 1890 a group hoping to introduce all the birds mentioned in Shakespeare’s plays imported about 60 starlings to the United States. Shakespeare wrote of the starling’s ability to mimic speech in Henry IV, “The king forbade my tongue to speak of Mortimer. But I will find him when he is asleep, and in his ear I’ll holler ‘Mortimer!’ Nay I’ll have a starling shall be taught to speak nothing but Mortimer, and give it to him to keep his anger still in motion.”

“Are the snowy owls here starving?” Snowy owls live on the tundra of northern Canada and Alaska. As a population, wintering snowy owls are not typically starving. Trauma-induced mortality was the major cause of death of these visiting owls. We have another beautiful raptor that is here in the winter. It is the rough-legged hawk. Rough-legged hawks sometimes hover in flight while hunting.

Char Roberts of New Ulm wrote, “We feed primarily black sunflower and golden safflower. We’ve noticed that there are no goldfinches on the feeders this winter.”

Goldfinches are nomadic when they aren’t nesting. They have little or no ties to an area. In the fall, most goldfinches abandon their nesting areas and head to open fields to feed on the seeds of native plants. They apparently find natural seeds more appealing than sunflower and nyjer (thistle) seeds. Until the natural food supplies are exhausted or covered in snow, the birds have no reason to seek food elsewhere. In winter, I notice that there are often more goldfinches on my sunflower seed feeders than at the nyjer feeders. Maybe sunflower seeds provide more of what the birds need to survive the cold. Many goldfinches, but not all, head south for the winter. Goldfinches moving down from the north replace many of those migrating birds. Some years, departures exceed arrivals. This winter, I’ll have a flock for a few days and then few birds for several days. Perhaps my yard is but one on their route. Goldfinches are certainly nomads. I await their return. The wait is worth it for such beautiful birds.

“How many birds are killed by wind-turbine blades?” Their large size makes them appear to be turning slow, but the blades are speeding. I attended a meeting where I learned that the blade tips move at speeds up to 180 miles per hour. Birds might not recognize blades as something to maneuver around. One study found that 573,000 birds died and another study found that 600,000 to 900,000 bats died at U.S. wind farms last year. Ornithologist Daniel Klem at Muhlenberg College estimates that at least one billion birds are killed by flying into windows every year in the U.S.

“Why did I find a boxelder bug in my house now?” Boxelder bugs eat boxelder tree seeds but will feed on the seeds of any maple species. When the weather chills, boxelder bugs search for places to safely overwinter. They hide under bark and leaf litter. They are attracted to sunny southern and western exposures that stay warmer, like the sides of houses. They crawl underneath the siding or into attics and wait for spring. If there are cracks in the walls or window frames, boxelder bugs might end up inside your house.

This from “Psychology Today”: “Instead of seeing the rainbow as violet, blue, blue-green, green, yellow, orange and red, dogs would see it as dark blue, light blue, gray, light yellow, darker yellow (sort of brown) and very dark gray. In other words, dogs see the colors of the world as basically yellow, blue and gray. They see the colors green, yellow and orange as yellowish, and they see violet and blue as blue. Blue-green is seen as a gray.”

A baby opossum is sometimes called a “joey.”

“Everybody is a genius. But if you judge a fish by its ability to climb a tree, it will live its whole life believing that it is stupid.” — Albert Einstein

“To shorten winter, borrow some money due in spring.” — W.J. Vogel