When he could hear the sundogs barking 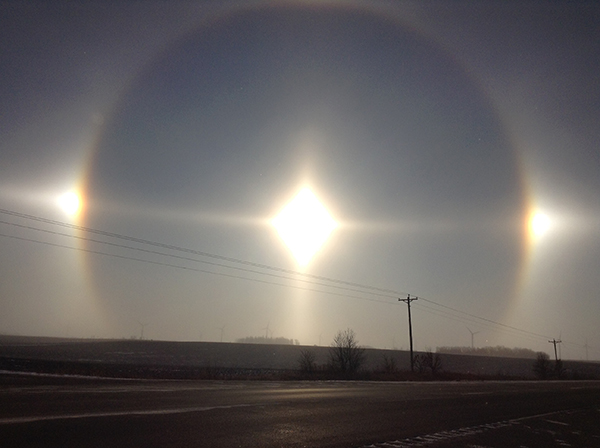 Who let the sundogs out? — Al Batt

Once upon a time, way back last week, the meteorologists were right.

They predicted cold and they nailed it.

It was cold. How cold was it? It was so cold, my shadow hid in my pocket.

If a warm front had tried to push into the area, it would have met an impenetrable cold. It was well below zero and the frigid temperature kept company with a strong wind.

It was one of those days that Grandma said “chilled her to her bones.”

Led Zeppelin sang about us, “We come from the land of the ice and snow.”

My wife and I found ourselves in a supermarket, ringing the bells for the Salvation Army and shopping for foodstuffs.

Frantic shoppers scurried this way and that. They had the look of someone who didn’t know where he was going and couldn’t remember where he’d been.

A high-powered businessman stopped to say “hello.” He was dressed impeccably, including a thermal necktie.

I always get a shopping cart. I never regret having one, only not having one. It’s similar to the old aphorism that maintains it’s better to have a coat and not need it than to need a coat and not have it. Shopping went quickly. I’m like many men, I don’t shop. I buy.

I appreciated the good folks who retrieved shopping carts from the parking lot for the store as they had donned clothing in heaps.

I saw Viking fans going through the three stages one goes through after a football season — disappointment, anger and wearing Green Bay Packer clothing.

A youngster ran up and down the supermarket aisles shouting, “Kyle! Kyle!”

Finally reunited with her father, who chided his daughter, “You shouldn’t call me ‘Kyle.’ I’m your father.”

People shivered and found it difficult to work up a smile.

During the years when my goldfish ran away and an on/ off switch was the cutting edge, I loved hearing the term “snow day.” I don’t recall any fondness when hearing “cold day.”

Stuff happens on cold days. Things don’t work as they should. Our garage door opener opened, but refused to be a garage door closer. A fellow shopper found that the doors of her Ford wouldn’t open. She had to call the dealership to come and open the doors of her Frozen On Raw Day. The good Ford moves in mysterious ways.

It was cold enough to make The Weather Channel watchers shudder and weep and too cold to ask someone, “Cold enough for you?”

The day had countless saving graces, the most apparent was that the sun was shining and there were sundogs.

I could almost hear the sundogs barking.

The sundogs were free. I’m glad I didn’t miss them.

Sundogs appear as light to the left or right of the sun, 22 degrees distant and level with the sun, and as ice halos. Sundogs are loyal to the sun and are best seen when the sun is low — near sunrise or sunset. Some people call them “sun ghosts” or “mock suns.” If the sun is close to the horizon, sundogs can give the impression of three suns.

Hal Borland wrote, “Sun dogs and moon dogs are beautiful accents to a winter day or night as the rainbow is to a showery summer day.” A moon dog, also called a paraselene, mock moon or false moon, is a bright spot or a luminous ring around the moon.

Sundogs are solar parhelia (parhelia meaning “with the sun”) that form when sunlight passes through ice crystals at a certain angle. Cirrus clouds in front of the sun produce sundogs, but ice fog or diamond dust also generate them.

I was comfortable in the misery. I replenished the peanuts in the bird feeders. The blue jays love them and I love the company of corvids. Cold brings an appreciation of warm blankets, wool socks and ugly hats with earflaps. We shoveled snow, bundled up, watched snowbirds fly up from graveled roadsides and celebrated well with friends and family.

We walked to our car on Christmas Eve. It had snowed heavily. Old Man Winter had put it down where we could step in it. Our shoes marred the perfection of the carpet of freshly fallen snow. The snow muffled sounds and created a silent night.

I would have frolicked had it not been for the ice.

The wind still whistled, but I rejoiced in temperatures above zero.