He was born Oct. 1, 1930, the son of Al and Genevieve Brooks in Rapid City, S.D. He attended schools in Michigan and Iowa. After graduating from high school in Coon Rapids, Iowa, he enlisted in the U.S. Army and was sent to Korea, where he was with a forward-observer squad when the Chinese swarmed into North Korea. He was captured and held prisoner as a POW from November 1950 to August 1953 in Camp No. 5. There is where he learned the true meaning of survival and helping his fellow POW’s to survive. Al received several honors for his service which included: Honorable Service Medal while POW, National Defense Service Medal, Combat Infantry Badge and Korean Service Medal. He always looked forward to the annual reunion with his fellow POW survivors. 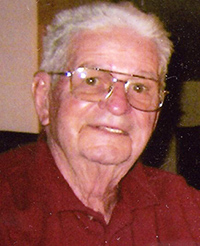 After returning home he was united in marriage to Patricia Jones Feb. 8, 1955, in Iowa making that place their home until moving to Albert Lea in 1959. Al worked at the Albert Lea Tribune from 1959 until 1972 when he started his own business, Brooks Safety Equipment, until his retirement in 1993 when his son, Al “Minnow,” took over the business. Al and Pat enjoyed 15 years of traveling and spending the winters in California and Arizona.

Al was a life member of the VFW and Ex-Prisoners of War and a member of the American Legion. He served on the VFW honor guard. He loved all sports; he played fast-pitch softball and was inducted into the Freeborn County Softball Hall of Fame. He also was a bowler and golfer. In addition to participating in sports, he enjoyed watching all his grandchildren’s activities, as well as following Albert Lea sports and spending time with his children and grandchildren.

He was preceded in death by his parents; brother, Don Brooks, and sisters Sally Hofbauer and Glenda Motzinger, mother- and father-in-laws and many brothers and sisters-in-laws. He loved his family dearly and will never be forgotten.

He was well-known and loved by many, many friends everywhere he went. Al was very patriotic and surely is still saying “God Bless the USA” in heaven. He will be greatly missed by his family, relatives and many friends.

A memorial service will be held at a later date in Albert Lea.