Blue birds don’t have any blue pigment in feathers

“Everything is nearly copacetic. I’m a poor cold weather starter and I’m getting a little on the heavy side. I wish it were only on the side. I signed up for an exercise class. I came home early from that class because I’d forgotten something.”

“That I didn’t want to go to an exercise class. I watched the Olympics instead. I like watching men’s figure skating on TV. It’s cured my insomnia. I like curling, too. It combines shuffleboard and housekeeping. I helped my sister Cruella take her cat to the veterinarian’s office. That should be an Olympic event. I don’t know how Noah got all those animals on the ark. Cruella and I struggled getting a single cat to the vet. One of my countless uncles would climb a tree to tell a lie. When he could stand on the ground and tell the truth, he told me to watch my health, not my money. While I was watching my health, he swiped my piggy bank. A while back, I called him collect just to say, “I’m perfectly well.” A week later, I received a heavy package from him. It was sent COD. Inside was a concrete block with a note reading, “This is the weight your call lifted from my mind.”

I spotted a snowy owl on the snow-covered ground not far from my home. It had hunkered down near a snow-filled dredge ditch. It was getting plenty of fresh air. A spotting scope was needed for my eyes to reach this handsome, mysterious visitor from the tundra. I was happy to see the bird and hoped that voles, the potato chips of the prairie, were keeping it well-fed. Cars are one of the biggest dangers to a snowy owl. They don’t understand cars and because of that, may be hit by speeding automobiles.

On a winter day that was kind enough not to have whiteout conditions, I was thrilled that there was some white out there for me to see.

“How can I tell a male mourning dove from a female?” The sexes are not easily distinguishable. Generally, the male’s coloration is a bit more vivid. Males show a bluish crown and nape with pinkish breast feathers. The female has a brownish crown and a tan or brown breast.

“Why are bluebirds blue?” John Burroughs wrote, “When nature made the bluebird she wished to propitiate both the sky and the earth, so she gave him the color of the one on his back and the hue of the other on his breast.” Bluebirds don’t have any blue pigment in their feathers. It’s a color produced by the structure. When light hits the feathers, tiny air pockets and melanin pigment crystals in each feather scatter blue light and absorb the other wavelengths. This scattering process is also what makes the sky appear blue. The more colorful male bluebirds are better able to secure nesting boxes and mate earlier. Females may look to color as a determination of a male’s successful functioning in the world. So when a male bluebird is feeling blue, he is happy. Is he a bluebird of happiness? He certainly is for me whenever I see one. 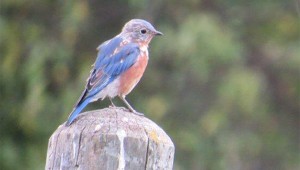 “I have a mouse in my house. What kind is it?” It’s likely one of three species. The house mouse originated in the Mediterranean to China, but spread throughout the world in the company of man and lives as a human commensal. Adults range in total size from 5 to 8 inches. They tend to have large ears, small eyes and a pointed nose. A house mouse’s tail can be 3 to 4 inches long, as long as its head and body combined. Back, feet and belly are all the same color in house mice, usually light brown, but can be nearly black. The next two species have big eyes and large ears. Because of this, many people call them “cute.” The deer mouse (referred by some as the field mouse) adult ranges in size from 6 to 8 inches, including tail. The long bi-colored tail is mostly hairless or very short-haired. The deer mouse has sandy brown fur on the head and back, yellowish on the flanks and white on the belly and feet. There is usually a small streak of yellow on the chest. The white-footed mouse is most common in homes located near forests, brush, or ag lands. It’s relatively small with a combined head and body measurement of just 3.5 to 4 inches. Its feet are white, as is the belly. The rest of the body and the tail are grayish to reddish-brown. The separation of colors on the tail are less distinctive than that of the deer mouse.

“Why was it called the ‘passenger’ pigeon?” It comes from an old term for a migratory bird. A bird of passage. The earliest example of a “bird of passage” that was used to mean a migratory bird was a 1717 entry in the Philosophical Transactions of the Royal Society of London. In that citation, flamingos were said to “visit us here in Europe, and so may be accounted amongst the Migratory Kind, or Birds of Passage.” Audubon watched a flock of passenger pigeons take three days to pass overhead. Alexander Wilson observed a flock of 2,230,272,000 birds. Once the most numerous bird species in North America, the passenger pigeon was relentlessly hunted to extinction, with the last individual (Martha) dying in captivity on September 1, 1914 at the Cincinnati Zoo.

“There comes a time in your life when you walk away from all the drama and people who create it. You surround yourself with people who make you laugh. Forget the bad and focus on the good. Love the people who treat you right, pray for the ones who don’t. Life is too short to be anything but happy. Falling down is a part of life, getting back up is living.” –Unknown.

“I caught a glimpse of happiness and saw it was a bird on a branch, fixing to take wing.”–Richard Peck