“Everything is nearly copacetic. There are so many obstacles that get in the way of me getting my work done. I just wish I had the time to thank them all. The weatherman said there’s a chance of snow, rain, sleet, ice, sun, clouds, strong winds, blizzard, cold and warm today. That guy doesn’t like to be wrong. Pop has hearing aids that record things for a replay at a more convenient time. He complained that his truck shakes every time he drives the paved road to town. He said it doesn’t happen all the time, but when it does, it happens not far from the stop sign.” 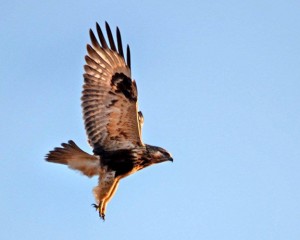 A Rough-legged hawk soars through the air. — Photo by Darcy Sime

“Bingo. He goes to town only when Ma begins to drive him crazy. He’s in one of those marriages where one person is always right. And it isn’t him. Pop is the toast of the town. The setting on his electric blanket was set much too high. Pop is a soup enthusiast, but Ma uses him as a guinea pig for her recipes. She cooks with olive oil, canola oil and sunflower oil, but mostly, she uses turmoil. She believes a good piping hot cup of coffee reduces stress. Especially if you spill it on the lap of whoever is bugging you.”

A caller asked, “Is that bird supposed be here?”

It was OK with me.

It was a brown creeper. It resembled moving bark.

Inspired by the caller, I went outside to graze on the beauty of birds. Crows called, likely reporting my presence. Silence is not a crow’s strong suit.

“All is divine,” said Thoreau, upon hearing a wood thrush. I feel the same when hearing the sounds of any bird.

I trod through snow deeper than my boots. I love walking and watching.

If you’re feeling bitter, look at a critter. John Muir wrote, “In every walk with nature one receives far more than he seeks.”

It was well below zero with strong winds. Snow moved. An elegant bald eagle was carried upon the wind whether it wanted to be or not.

We have four to six seasons in Minnesota. Or is it 46 seasons?

I heard a storyteller tell an ancient story of the Iroquois people. A ceremony took place at the solstice and they played the bowl game in which six small stones, painted black on one side and white on the other, were put into a bowl. The wooden bowl was decorated with four clan symbols – the bear, wolf, turtle and deer. To play the game, a player hit the bowl against the ground. If five of the six stones turned up the same color, the player scored a point and took another turn. The first player to reach 10 points won the game.

Long ago, Sky Woman looked down on the Earth and wasn’t happy with what she saw. She said, “Life on Earth must end.” Sky Woman’s twin grandsons were Good Mind, the benefactor of the Iroquois who created many things to help the people, and Bad Mind, who created many obstacles for humankind.

Good Mind said, “Grandmother, is there no way I can prevent this from happening?”

She said to him, “I will give you this. You and I will play the bowl game, and the one who wins will decide whether or not life will continue.”

The Good Mind went to the chickadees. He said to them, “My friends, I want you to help me.” He asked the tiny birds to lend him six of their heads to put into the bowl.

The chickadees replied, “Of course, you may borrow our heads, which are black on one side and white on the other, put them in the bowl, and we will do what we can.”

When the Good Mind hit the bowl on the ground, the chickadees flew up, their heads looking like little black and white stones. They flew about singing. They landed in the bowl, all six of them the same color. A perfect score.

The Good Mind won the bowl game and life on Earth continues. And to this day, in the middle of the coldest winter, the chickadees sing and celebrate the continuance of life.

In “Ornithology” by Frank B. Gill, it says that 13 percent of bird species, including most seabirds, nest in colonies. Colonial nesting evolves in response to a combination of a shortage of nesting sites that are safe from predators and abundant food sources nearby or unpredictable food sources elsewhere.

Roger Tory Peterson used a pair of 7-by-42 binoculars while working on the last edition of “The Peterson Field Guide to Birds of North America.” David Sibley used the same size when preparing “The Sibley Guide to Birds.”

Turkeys were domesticated by Native Americans centuries before the arrival of Europeans. Both their meat and feathers were prized.

A new study published in the journal “Nature” has found evidence to suggest that certain birds adopt a v-formation while in flight in order to improve aerodynamics and conserve energy. To fly, birds push air downwards with regular wing movements that generate a vortex. This includes an updraft from the wings that provides lift while air flowing from the bottom of the wing pushes downward. Birds time their wing beats to exploit this vortex and save energy by catching a lift from the bird ahead. This is the first experimental evidence that birds can adjust their flapping to take advantage of the wake.

Our brain weighs 1.9 percent on average of our body weight. Ravens and crows have brains that make up 1.4 percent of their body weight.

A groundhog was once commonly called a pasture pup in the east.

“And above all, watch with glittering eyes the whole world around you because the greatest secrets are always hidden in the most unlikely places. Those who don’t believe in magic will never find it.” ― Roald Dahl