Funeral services for Edward B. Tukua, 78, of Albert Lea will be at 10:30 a.m. Tuesday at First Lutheran Church. The Rev. Al Stoa will officiate. Interment will be at Graceland Cemetery. Visitation will be from 4 to 7 p.m. Monday at Bayview/Freeborn Funeral Home and one hour prior to the service at the church. Online condolences are welcome at www.bayviewfuneral.com. 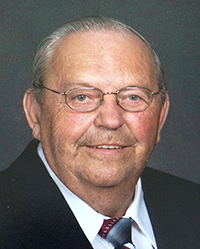 Edward B. Tukua was born on Oct. 31, 1935, the son of Ben and Bernice (Newgard) Tukua in Albert Lea. He grew up and attended school in Freeborn. On Nov. 8, 1953, Ed was united in marriage to Lois Indrelie at West Freeborn Lutheran Church. They celebrated their 60th wedding anniversary last year. Ed farmed for 40 years; once retired, he and Lois moved to Albert Lea where he delivered the Albert Lea Tribune for several years. He enjoyed his many fishing trips up north with his family. Ed later bought a cabin on St. Olaf Lake where he spent many great hours fishing and relaxing. Ed was very proud of his family, especially his grandchildren and great-grandchildren.

Ed was preceded in death by his parents; father and mother-in-law, Ole and Alvilda Indrelie; brother-in-law, Lowell Indrelie, and nephew, Jeff Tukua.