Have you been to Curtis? 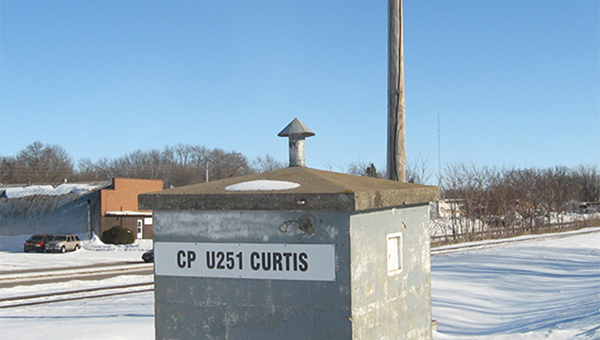 Editor’s note: This is the first of a series featuring some of Ed Shannon’s best Lifestyles features. The following article was published on Feb. 18, 2011.

Not long ago Tim Engstrom, the Tribune’s editor, asked me if I knew of a place in the area named Curtis. About all I could say in reply was that it was once a location next to the railroad tracks on the south side of Albert Lea.

What inspired his inquiry was a map from the Union Pacific Railroad showing the route of the branch line between Albert Lea to Hartland being proposed for abandonment later this year. His article starting on the Front Page of the Jan. 26 issue gives more details regarding the proposed future use for a rail route that was once an important part of area life.

Yet, the map shows that the 12.6 miles of railroad trackage to be removed actually runs from Hartland to a place within Albert Lea named Curtis.

About two days later I was driving down South Broadway Avenue. Just beyond Hardee’s I turned left onto Southeast Broadway. At this point I looked off to the right and saw a sign on the side of a small building just across the tracks that clearly indicated this was Curtis.

The railroads always have used names to designate locations along their tracks. And for many years the name of Curtis was used as an important part of area operations for several railroads.

Not far from that small building with the antenna on the top of a pole near the corner of South Broadway and Railroad Avenues is what was once the junction point for two railroads for maybe seven or eight decades.

Curtis was the place within Albert Lea where the Minneapolis and St. Louis Railroad (M&StL) coming from the north through Waseca, New Richland and Hartland joined what was then the Chicago Rock Island & Pacific Railroad. The Rock Island line went from Owatonna through Ellendale, Clarks Grove to Albert Lea and Curtis.

From Curtis on south to Glenville, Gordonsville and on into Iowa through Northwood, Kensett to Manly, the two railroads carefully shared the trackage. To give even more real emphasis to the joint trackage concept, still another railroad, the Illinois Central, had trackage rights from Glenville to Curtis and on into Albert Lea for many years.

This topic of railroads reminds me of an old joke one of my Army band buddies liked to use.

Whenever our band’s bus came to a railroad crossing, he would say, “I see there’s been a train that’s gone by here.”

This was the cue for someone to say, “How can you tell?”

His reply was. “I can see its tracks.”

This joke would be worthless to use for the trackage between Curtis and Hartland. At the present time those tracks are completely snow-covered. Yet, years ago this railroad route on Albert Lea’s west side was a mighty busy place. The M&StL had freight and passenger trains galore using those tracks plus more to the west of the depot. That depot, still to the south of the viaduct, was once an important focal point of local life and commerce.

Sadly, through the years the use of this rail line from Curtis to Hartland gradually faded away to nothing. Now the Union Pacific Railroad Co. wants to abandon this part of their system. The Dakota, Minnesota & Eastern owns the line from Hartland to Waseca.

The other route, going north through Clarks Grove to Owatonna, remains quite active as part of the Union Pacific’s Spine Line, which also heads south out of Curtis to Glenville. The Spine Line connects St. Paul to Kansas City.

I’m tempted to comment that the long bridge on West Main Street between Euclid and First avenues is now the viaduct over nothing. Yet, that wouldn’t be quite right. In the future this bridge would be the viaduct over a biking and walking trail, possibly with the name of the Bent Tree Trail. And like what’s happened elsewhere in the Midwest, this roadbed from Curtis to Hartland could be part of an excellent example of a rails-to-trails conversion project.