Funeral services for Mary A. Landaas, 90, of Albert Lea, will be at 1:30 p.m., Monday at Round Prairie Lutheran Church.  The Revs. Kent Otterman and Richard Spande will officiate. Interment will be in the Round Prairie Lutheran Cemetery. Visitation will be from 4 to 6 p.m. Sunday at the Bayview/Freeborn Funeral Home, and one hour prior to the time of the service at the church on Monday. Online condolences are welcome at www.bayviewfuneral.com. 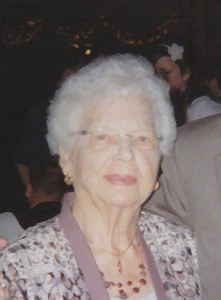 Mary Agnes (Andersen) Landaas was born Dec. 6, 1923, to Lionel and Alvilde (Petersen) Andersen at the family home. She was baptized and confirmed by the Rev. A.C. Korsrud. She was a life-long member of Round Prairie Lutheran Church. She attended a one-room school through eighth grade and then graduated from Albert Lea High School. While there, she was assistant pianist and sang in the Glee Club under the direction of L.J. “Cap” Emmons. She also took private piano lessons from him. After graduation, Mary attended Hamilton College in Mason City and was employed in the office of Jacob E. Decker & Sons. In late 1942 she moved to San Francisco, where her future husband was in the army. She was employed in the office of Standard Oil of California. On Dec. 5, 1942, she was married to Alfred Landaas in a military wedding at the Ft. Scott chapel in the Presidio, near the Golden Gate Bridge. In 1945 Alfred was transferred to Gainesville, Texas. There she was employed as a nanny and housekeeper for the secretary-treasurer of the American Palomino Association. In 1946, Alfred was discharged from the Army and they moved back to Albert Lea, where she was employed in the office of Wilson and Co. In 1948, they moved to their farm in Freeman Township where they lived for 58 years. They raised three children, so she was a stay-at-home mom, the best job of all.

During those years, she was active in several organizations and held offices in the church Ladies’ Aid, Circle, SE Minnesota Lutheran Women, Emmons PTA and Band Boosters, St. John’s Auxiliary and was a Sunday school and vacation Bible school teacher. She enjoyed watching her children and grandchildren in many sports, band concerts, school plays and equestrian events. Some of her favorite activities were playing hand chimes with the Round Prairie Chime Choir and playing piano/organ duets with Helen Holstad for many years. Her favorite was having all of her grandchildren come to her house at Christmas time and make gingerbread houses, which they did for many years. In 1975, Mary began working as a travel guide for the Minnesota Tourism Bureau and was given a Minnesota Employee of the Year award. She retired from there in 1991.