Funeral services for long-time Albert Lea educator, Richard Arlen Hart, will be at 2 p.m. Sunday at the United Methodist church of Albert Lea. The Rev. Tom Biatek will officiate. Visitation will be from 6 to 8 p.m. Saturday at the Bonnerup Funeral Chapel and again one hour prior to the service at the church. Interment will be at the Red Oak Grove Cemetery. 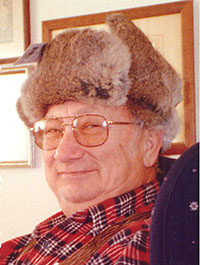 Richard was born on Jan. 7, 1932, at home in rural Olmsted County, the son of Edna (Horton) and Orval Hart. He graduated from Pine Island High School and earned a teaching degree from Winona State University. He completed his master’s degree in mathematics and science at the University of North Dakota in Grand Forks, attending graduate school on scholarship. Richard served in the United States Army at Fort Belvoir and played semi-professional baseball. After working for a year at Fulda, he taught science to several generations of Albert Lea students and was employed by the school district from 1958 until his retirement in 1991. He coached baseball and football at the junior high level and taught drivers training as well as the summer science program.

Richard married Beverly Dearmin in Austin in 1953 and had just celebrated his 60th wedding anniversary. He was the father of four children, the grandfather of 10 grandchildren, as well as seven great-grandchildren. A skilled craftsman, Richard rebuilt his home with his own hands when it was destroyed by a tornado in April 1967. (This home was built on the site of Richard’s previous house, a structure that he also built with his own labor and completed only a month before the tornado). Richard was an avid sportsman and conservationist and enjoyed many outdoor activities, particularly hunting and fishing at his lake cabin, a place on Graves Lake that he also built. He liked to golf and bowl with his friends, was an excellent cook and was well-known as a referee at school-sanctioned sporting events throughout southern Minnesota. He spent most summers relaxing at his cabin near Grand Rapids. He enjoyed reading and the study of history. A sociable man, Richard Hart had innumerable friends and was a member of the American Legion and the Fountain lake Sportsman’s Club.

He was preceded in death by his parents and his brother Neil Hart.