Tigers down Mankato-East on senior night 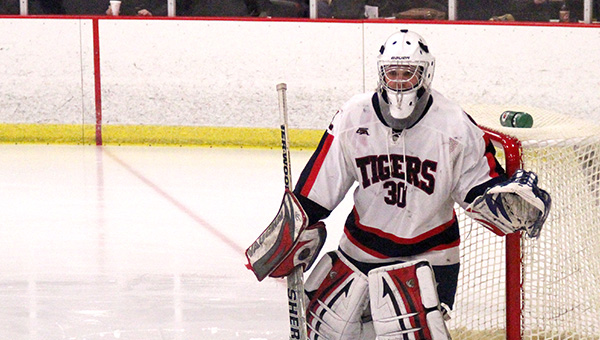 Albert Lea’s seniors stepped into the spotlight on senior night.

The Tigers (12-10-1 overall, 9-6 Big Nine Conference) took down Mankato East 6-2 Thursday in their last home game of the regular season. All of Albert Lea’s goals were scored by seniors.

“That’s really neat,” said Albert Lea head coach Roy Nystrom when he looked at the stat sheet and realized all of the team’s scoring came from seniors.

Senior backup goaltender Adam Syverson got the start in place of Garrett Matz and stopped 23 of the 25 shots he faced.

“He played pretty well tonight,” Nystrom said of Syverson, adding that goaltending would need to be strong for the Tigers to do well in the playoffs.

With the scored tied 1-1 after one period, the Tigers broke it open in the second. Senior forward Van Zelenak scored his first of three goals on the night 4 minutes into the second when he clanged a shot off of the crossbar and in. Two minutes later, Zelenak struck again when he trailed the Tigers’ rush and hammered a rebound home. Zelenak had one assist to go with three goals.

“Van can shoot the puck; he’s definitely our best player,” Nystrom said. “He handles the puck well, he’s got good speed and good hands. He’s really a force out there.”

Lucas Peterson extended Albert Lea’s lead 11 minutes into the second when he scored on a two-on-one shorthanded rush.

The Tigers had 44 shots on goal. Mankato East had 25. Albert Lea took two minor penalties in the game compared to the Cougars’ three.

The Tigers will wrap up regular season play at 3 p.m. Saturday at Winona. Albert Lea took down Winona 2-1 at home on Monday.