Tigers fall to Northfield in Section 1A quarterfinals 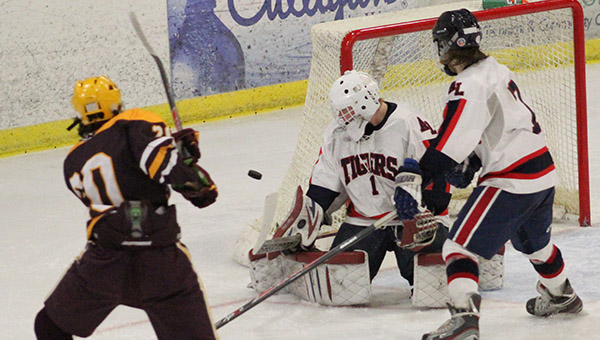 Scoring had been a problem for the Albert Lea boys’ hockey team all season. Its lack of lighting the lamp ended the Tigers’ season on Friday night.

The Tigers fell 2-1 against Northfield in the second round of the Section 1A tournament at Albert Lea City Arena. Albert Lea finished its regular season 14-10-1 and 1-1 in the playoffs. Northfield ended the Tigers’ season for the third consecutive year. 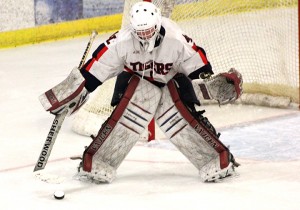 “It was a tight game, just like all the rest that we played this year,” said Albert Lea head coach Roy Nystrom. “It’s the story of the season, just not enough goals scored.”

Alex Claassen scored Albert Lea’s lone goal with less than a minute left in the game when the Tigers pulled their goaltender. The goal gave Albert Lea a glimmer of hope and made the game 2-1. The Tigers were able to pull Garrett Matz again but weren’t able to come up with the game-tying goal.

“They did a pretty good job on us tonight,” Nystrom said. “They kept us out of the slot tonight. In fact, in the first period we never had a shot in the slot. The second period I think we had four, and then we came alive in the third period.” 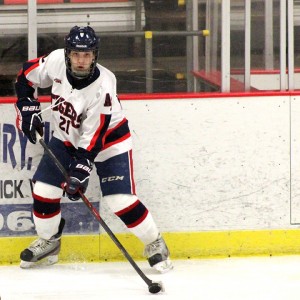 Foster Otten of Albert Lea looks to pass the puck to a teammate Friday during the Section 1A quarterfinals against Northfield at Albert Lea City Arena. — Drew Claussen/Albert Lea Tribune

It had appeared the Tigers scored their first goal of the game earlier in the third period when Andrew Thompson found the back of the net, but officials determined the net was knocked before the goal. Northfield’s net left its moorings multiple times throughout the game. Even though it didn’t factor into the goal, it was waived off. The game would have been tied 1-1 had the goal counted.

“I’m pretty proud of these kids and the way they played. They always gave us an effort,” Nystrom said. “Sometimes things just don’t go your way, but they plugged right to the end. Realistically, that net being off didn’t have anything to do with the goal whatsoever.”

Northfield built its lead by scoring once in the second period and once in the third. The two teams played a very clean game, each taking one penalty. Northfield scored its first goal on the power play.

Matz had 30 saves in the game and Northfield goaltender Matthew Foss had 27.

Nystrom wrapped up his 41st season as a high school coach and said right now he plans on coming back for No. 42.