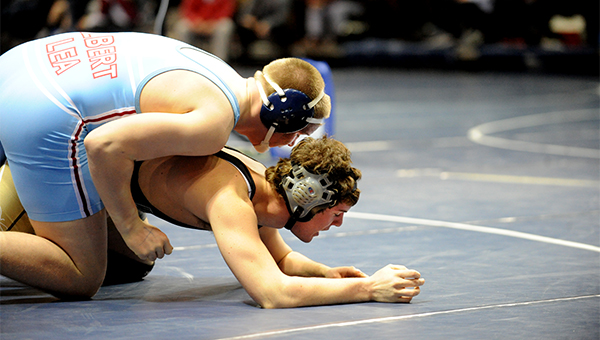 The Tigers walked out of Rochester’s Mayo Civic Center with four individual champions and state participants.

Garrett Aldrich at 106 pounds, Devin Nelson at 138, Derek Samudio at 152 and Triston Westerlund at 195 will represent Albert Lea at the Minnesota state wrestling tournament at the Xcel Energy Center in St. Paul.

“We did get four champs,” Goodnature said. “And I think we had a pretty good section individual tournament. The four champs really wrestled tough.”

Aldrich had a dominating run to his title at 106 pounds. The freshman pinned Kasson-Mantorville’s Keaton Schorr at the 5:52 mark of the match. Aldrich, who was the No. 1 seed, finished the tournament with two pins and a 14-2 major decision.

Nelson also cruised to a 7-0 victory over Waseca’s Tristan Hoy in his championship bout. Nelson was also the No. 1 seed at 138 pounds and finished the tournament with a 14-2 major decision and a fall to go along with his 7-0 victory over Hoy.

“Section 1AA is a really tough section,” Goodnature said. “So our No. 1 seeds wrestled to their seeds and had a really good two days of wrestling.”

Samudio and Westerlund’s championship matches weren’t quite as easy, but Goodnature said he was impressed with the mental toughness both wrestlers showed in their matches.

“Not only did they wrestle a good match, but you have got to be smart when you’re out there,” he said. “Pick your times when you’re going to make an attempt or not, and know when not to. Just keep good position.”

“Samudio had a really good tournament as far as placing first in a really tough bracket,” Goodnature said.

Westerlund picked up a 4-2 decision over Kasson-Mantorville’s Chase O’Connor at 195 pounds. The top seed picked up two wins by fall on his way to the championship match.

Beau Johnsrud at 120 pounds and William Mendez at heavyweight picked up third-place finishes for Albert Lea this weekend. The heavyweight bracket featured the No. 1 big man in the nation, Kasson-Mantorville’s Sam Stoll, who Mendez ran into in the semifinals.

“Mendez got beat by him and then battled all the way back to third place and then lost the chance for true second in a heartbreaker,” Goodnature said.

Tim Christianson suffered two one-point losses in the tournament and was forced to settle for fifth place at 182 pounds.

“That’s tough,” Goodnature said. “One hundred eighty-two was a very balanced and tough bracket, and all of those kids were about the same ability. But he wrestled tough and gave everything he had. It just didn’t work out for him.”

Goodnature said the four remaining wrestlers will have a normal week of practice that includes morning and afternoon practice on Monday and Wednesday. They will weigh in at the Xcel Energy Center Thursday afternoon.

“We’re not going to change anything,” Goodnature said. “They’ll be showing up (Monday) at 7 a.m. for morning practice just like we’ve done for the last three-and-a-half months.”

Statistics from Day 2 of the Section 1AA wrestling tournament are in the Scoreboard: Feb. 22 post.