The Rev. Leo O. Bjorlie, 91, child of God, died peacefully surrounded by family on Monday, March 17, 2014, in the care center of Northfield Retirement Community. A gentle man with an impish soul, Bjorlie was widely known for his love of music, poetry, literature (especially Shakespeare), and family. He was always quick with a story and a warm handshake or embrace for everyone he met. He used his storytelling to make those around him feel welcome and loved. 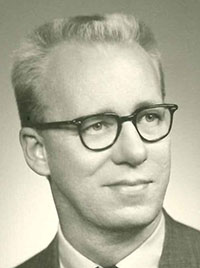 Bjorlie was born Aug. 23, 1922, in Emmons. He grew up in Albert Lea, graduating from Albert Lea High School in 1940. He attended St. Olaf College in Northfield as an English major, graduating in 1944, where he met the woman who was to become his wife of nearly 70 years, Lois Brenna. They served together in parishes in Slater, New Hampton, Crane Creek and Northwood in Iowa; Minot and Kathryn, N.D.; St. Paul, Hope and Albert Lea. While a student at St. Olaf, he served as a radio personality for WCAL, the first radio station in the nation and a founding member of National Public Radio. Bjorlie was also ready to serve his country during World War II, but was honorably discharged for medical reasons.

A good and faithful servant, music was integral to his life and ministry. He built a lifetime of making a joyful noise unto the Lord. He was an accomplished tuba, accordion and piano player. While serving at Memorial Lutheran Church in St. Paul, he was a mainstay as one of the three wise men in the annual city-wide Christmas pageant. He was an example of servant-leadership, unafraid to serve his congregations whether from the boiler room, the kitchen sink or the pulpit. He had a poem for every occasion whether silly, joyful or sad.

Leo and Lois Bjorlie raised six wonderful children and they were always enthusiastic supporters of their children, 16 grandchildren and 10 great-grandchildren. He is survived by his children: Ellen (James) Ellickson of Eden Valley, Leo (Carol) Bjorlie of Asheville, N.C., John (Cynthia) Bjorlie of Gloucester, Mass., Lois Bjorlie (Corey Mohan) of St. Paul and Ruthie (David) Neuger of Northfield; sister-in-law, Esther Burmeister, of Harmony, and numerous nieces, nephews, grandchildren and great-grandchildren. He is preceded in death by his wife, Lois Brenna Bjorlie; parents, Lars and Karen Marie Bjorlie, and son, Mark Bjorlie.

L. O. Bjorlie will forever be remembered for his wisdom, kind words, deep and abiding faith and acceptance of all people. Known to his family as Grandpa Pancakes, he was a spilliwinker full of the dickens who experienced life with a twinkle in his eyes. His Christian faith, reflecting gratitude, forgiveness and mercy was a model for all who knew him.

Arrangements are with the Benson & Langehough Funeral Home.