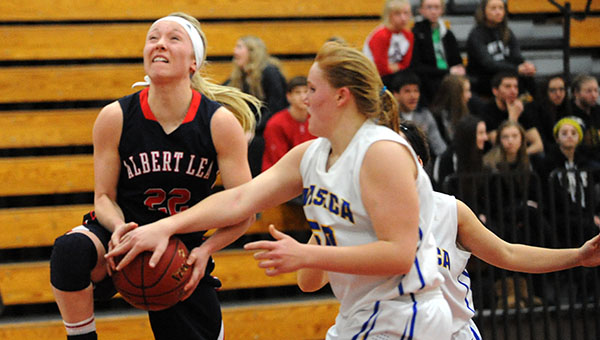 Albert Lea’s Bryn Woodside gets fouled on her way up for layup during Wednesday’s Section 1AAA victory over Waseca. — Drew Claussen/Albert Lea Tribune

When the Albert Lea and Waseca girls’ basketball teams met during the regular season, the Tigers came away with a one-point win, and the two teams delivered another thriller in the postseason. 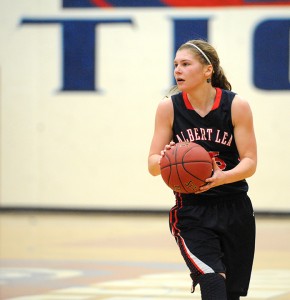 “I was so proud of how composed the girls were,” said Albert Lea head coach Lindsey Hugstad-Vaa. “When their shots weren’t falling and they had to buckle down on defense, they had a few really good possessions to stop them from scoring.”

Defense was the story of the game. Albert Lea’s two-point shooting percentage was 29 percent and it shot 30 percent from downtown.

“Our shooting percentage wasn’t as high as it usually is, and our free-throw percentage wasn’t either,” Hugstad-Vaa said. “But with that happening and with tired legs, they were still pushing through and playing together. And that’s the important thing because when the games get close, keeping that composure all the way through the end is key.”

Sydney Rehnelt drained a 3-pointer in the second half that extended the Tigers’ lead and gave her 1,000 career points. Albert Lea assistant coach Karol Hansen took the ball out of play during the next stoppage and gave it to Rehnelt’s parents.

“That was huge, and now it’s a big relief off her shoulders,” Hugstad-Vaa said. “Now she doesn’t have to worry about it. We’re really excited and proud of her. We knew what she had to get in this game and when her shots weren’t falling in the first half we told her, ‘Be patient and keep attacking.’ We’re just really proud of her because that’s a rare accomplishment to get.”

Waseca converted 33 percent of its two-point baskets and shot 23 percent for three-point land. The Tigers had 15 offensive rebounds, 22 defensive rebounds and seven steals. Albert Lea held a slim lead throughout the game, but never surrendered when Waseca rallied to cut that lead down or tie the game.

The Tigers’ big three evenly distributed the scoring. Bryn Woodside and Megan Kortan had 15 points each and Rehnelt had 14. Caycee Gilbertson had eight rebounds.

“It was definitely nice to see them go out on top,” Hugstad-Vaa said.

The fourth-seeded Tigers will go on the road to face top-seeded Kasson-Mantorville at 7 p.m. Saturday.