Memorial services for Donald J. Stanley, 82, of Albert Lea will be at 3 p.m. Thursday at United Methodist Church in Albert Lea. The Rev. Tom Biatek will officiate. Interment will be in Graceland Cemetery. Friends may visit with family one hour before services at the church. 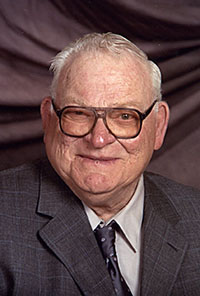 Don was an Albert Lea High School graduate. Following graduation he began working for Jensen Transport, then on to Jack’s Mobile, Montgomery Ward and was at Bill Olson of Crossroad Motors as a mechanic, until his retirement. Don was a great mechanic, who could fix about anything.

Don was a member of United Methodist Church in Albert Lea. He was one of the original members of the Freeborn County Snowmobile Club.

Don had many interests which included restoring antique IH tractors, watching and attending NASCAR races and going to stock car races in Elko to watch his grandson, where he hardly missed a Saturday night in seven years of racing. Over the years he enjoyed his driving trips out west, most recently going to Rocky Mountain National Park in September with Dan and Duane. He also enjoyed attending Vikings football games at the old Met Stadium. He loved seeing and being with his family, especially his grandchildren. He was so proud of his grandchildren, he lived through their accomplishments, proudly telling others stories of their endeavors. He enjoyed his pet dogs over the years, as well as his beloved cat, Maize.

Don is survived by two sons, Dan Stanley and his wife, Karen (Wencl), of Prior Lake and Duane

Shirley Hovland, and her husband, Melvin, of Albert Lea; sisters-in-law and brothers-in-law

Kathy and Ben Schoon of Albert Lea, Shirley Stanley of Apple Valley and Melvin Guerts of Lynville, Iowa; and numerous nieces, nephews, cousins and their families.

He was preceded in death by his parents, John R. and Ethel Stanley; brothers Lilburn Stanley, Jack Stanley, Robert Stanley and his wife, Beverly, and Gordy Stanley; sisters Iris Guerts and Karen and her husband ,Melvin Ver Steegt; father-in-law and mother-in-law Clarence and Evelyn Bailey; and his wife, Delores, in Oct. 2011.

The family would like to especially thank Lavonne Krueger and Lisa Deyo for all their tender loving care.